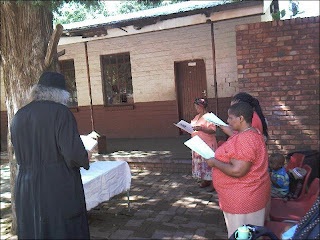 We arrived at Zakhele School in Mamelodi this morning for the Hours and Readers Service. The burglar alarm was going off in the school media centre, so Val phoned the security company, but they said the client had been suspended. The classroom we usually use was locked, so we found a desk, propped up the ikons against a tree, and had our service there, to the intermittent accompaniment of the burglar alarm, the shouting Zionist man who usually has the classroom next to ours (theirs was open) and the neopentecostal amplifier at the other end of the school yard.

On the way home afterwards we noticed blooming election posters, now that the date of the general election has been announced, mostly ANC and Democratic Alliance at this stage. I've heard that there are 114 parties contesting the election this time, so no one can say we don't have a choice. One result is certain, a politician weill be elected.
Posted by Steve Hayes at 14:24

But as to your service, is that orthodoxy in a post-modern setting..? ;)

114 --the ballot paper will be a book! Maybe need an index to find the party of your choice!

Postmodern? Possibly. A bit surreal. A tree, a dustbin, a bit like a scene from Waiting for Godot, an amplified crooner, a Zionist ranter, a burglar alarm siren, and us.

Interesting. Did the liturgy feel different out of doors? Did you feel more connected to the energies of God, for instance?