Midnight for Charlie Bone by Jenny Nimmo
My rating: 4 of 5 stars

It seems, from other reviews on GoodReads, that a lot of readers expected this book to be like the Harry Potter books, and judged it largely by comparison with them; they were the current literary sensation at the time this one was published, and it seems to have suffered by the comparison in not living up to some people's expectations, though others seem to have overhyped the comparison.

I didn't have any such expectations, having plucked it off a library shelf and briefly looking at the blurb. I doubt that I'll read any more of the series, because I didn't see any of the others in the library, and |I've never seen any of the others, or even this one, in a bookshop. It did occur to me, after reading a few chapters, that it might appeal to people who enjoyed the Harry Potter books, because it uses some of the same tropes -- boy from dysfunctional home goes to boarding school, makes friends and enemies, drama ensues, often involving magic.

Some tropes may have been inspired by the Harry Potter books -- the lost-in-a-maze one, for example, which appeared in Harry Potter and the Goblet of Fire, which was published two years before this one. And I don't think either of them handled it particularly well. In this book it was the denouement, and it was a bit sketchy and could have gone into a little more detail. 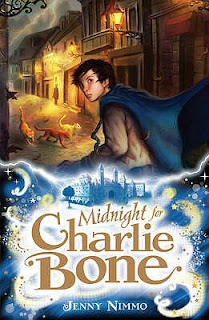 Charlie Bone is about 10 years old (his best friend Benjamin Brown has his 10th birthday at the beginning of the book) Charlie lives with his mother, two grandmothers, and a reclusive and eccentric great-uncle. One grandmother, his mother's mother, is kind and friendly and does most of the cooking and housekeeping. His father's mother is cross and grumpy and rather strict, but it is her money that has kept the family going since Charlie's father died when he was two years old.

When the strict grandmother's sisters, the Yewbeam aunts, visit, after hearing that he has a special gift for hearing people speaking in photographs, they decide that Charlie must go to boarding school. Charlie doesn't want to go to a different school from his friend Benjamin, but the Yewbeams hold the purse strings, and get their way.

The main characters are children of 10-11 years old, and the book is clearly written for children of that age or a little younger. I found it an interesting and enjoyable read and I suspect that most kids of that age would too.

Not everyone thinks so, though. If you want negative view of the book, try this review, from a 16-year-old, which is particularly critical of the style. I found her comments on the style interesting, but also rather puzzling.

I have only a few things to comment on, the first being Jenny Nimmo’s writing style. Yes, I understand that this is a fantasy written for children younger than I am (I’m sixteen, by the way). But honestly, this gives her no excuse to write in the way that she does. What is it, exactly, that I am referring to? Simple—and believe me when I say that “simple” is the right word to use in this situation. Nimmo never gives her characters a chance to express themselves, instead speaking in their place and telling the readers about their actions. Never does Charlie “clench his fists and stare ahead through narrowed eyes”. He is merely described as angry. There is no indication of what he does when he’s angry, how he reacts, or even what he is thinking (more often than not). It isn’t only Charlie, however; every character you come into contact with is practically a cardboard cut out with a narrator following him/her around to explain how they feel. Even young children like to experience the characters’ emotions along with them, and Nimmo seems to think that young equals stupid. Along with this, the sentences she uses are awfully short and rather choppy as well. Yes, children are used to reading such things, but taking the content of the Charlie Bone books into account, the kids reading them are at least able to understand what sentence variety is. Meaning, of course, that they should be able to handle it. In my opinion, this book would have been much better had the author allowed her characters to speak for themselves, and if she’d varied her sentences to include compounds.

It makes me very curious to know what that reviewer thinks is good style. I would like to see some examples. Not everyone gives expression to their emotions by actions, gestures and attitudes, and I can't recall anyone who would "clench his fists and stare4 ahead with narrowed eyes". I don't think I've ever clenched my fists when I've been angry. I think there is a scene in the book somewhere where someone rolls their eyes. It's a description that I find rather embarrassing. I don't know anyone who rolls their eyes. Perhaps that gesture is confined to a particular culture. But the biggest puzzle is the criticism that the style is too simple. Perhaps I've been brainwashed by the "plain English| movement, and had derived my notions of good style from crusty old fogies like Fowler and Sir Ernest Gowers. I've also perhaps been corrupted by having worked too long as an editor of academic texts, whose writers are often seem to think that the more difficult a text is to read and understand, the more "scientific" it is, A few of their fellow academics have criticised that view, for example:

The attraction of jargon and obfuscating convolutions can be fully explained by the normal striving of humans for emoluments and prestige at the least cost to themselves, the cost in question consisting of the mental effort and danger of 'sticking one's neck out' or 'putting one's foot in it'. In addition to eliminating such risks, as well as the need to learn much, nebulous verbosity opens a road to the most prestigious academic posts to people of small intelligence whose limitations would stand naked if they had to state what they have to say clearly and succinctly (Quoted from Social Sciences as Sorcery by Stansilav Andreski.

Is that kind of complex writing what is needed for ten-year-olds?

So while I didn't think the sty;e of Midnight for Charlie Bone was outstandingly brilliant, I didn't see anything particularly wrong with it, nor with that of the Harry Potter books, and both were a considerable improvement on Enid Blyton, which several generations of kids have enjoyed.

The Spire by William Golding
My rating: 3 of 5 stars

Not sure what to say about this book, except that it reminded me a bit of Malone Dies, which I re-read last year.

I kept thinking I was missing something, and went back to read certain bits, and then back to the beginning to see if I could pin it down, but I haven't been able to so far.

One of my first impressions, when I started reading it, was that it was a kind of parable for the Covid pandemic. The builders kept warning the dead, ?Jocelin, that it was not possible to build such a spire on such shaky foundations, but he urged them to go ahead anyway. And I thought of Donald Trump in the USA, telling people that it wasn't serious, and that anyway a vaccine would soon be developed that would solve the problem, and when the vaccine was developed, many of his supporters refused to take it. It seemed to be that kind of folly.

Experts on writing fiction (often self-proclaimed experts) warn against including too much of the backstory in a novel -- get on with the action. But reading The Spire I keep wishing for more of the backstory. Jocelin thinks about his angel, his demon, a witch and other things, as if the author expects readers to be familiar with the background, background that I seem to have missed on my first reading, and am still missing in the second.

Eventually there is some kind of commission of inquiry, and they tell him that he can go back to the deanery, where he goes, apparently to die. Other than that, we are not told their findings. Is he still dean, or has he been replaced? But he goes to his room, like in Malone Dies, but keeps getting up and wandering around, and eventually gets taken back to bed to die. Like Malone.

What have I missed?