Searching for Zion: The Quest for Home in the African Diaspora by Emily Raboteau
My rating: 5 of 5 stars

A history of people who are searching for a lost home and for the promised land.

Emily Raboteau, daughter of an eminent historian and herself a student of history, writes a personal and family history as well as a story of people searching for the promised land.

I saw it displayed on a stand of new acquisitions in our local library, and grabbed it. Since the book is an intensely personal one, I'm making this a personal review, or rather reaction, so I'll explain why it attracted my attention. The first thing was the word "Zion". I've been interested in Zionist churches since the age of 14, when I met a Zionist minister who mentored me in the Christian faith, which was then a fairly new discovery for me, having had an almost entirely secular upbringing. So I wanted to see if the book said anything about Zionist Christians (it didn't).

The second thing that attracted me was the name of the author. I knew of Albert Raboteau, the church historian, who, having been raised a Roman Catholic, later became Orthodox, so I wondered if the author was related to him. It turned out that she was his daughter.

The trouble with a promised land it that one usually finds other people already living there, and so it is and was with modern and ancient Israel. Raboteau meets "Black Jews" who came from Ethiopia, and had left Ethiopia because they saw Mount Zion in Jerusalem as the promised land. 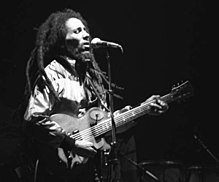 But for Rastafarians, Ethiopia itself is the promised land, so her journey takes her to Jamaica, drawn partly by her interest in Bob Marley's music, and the fact that Marley, like herself, was of "mixed" ancestry. Raboteau did not mention in her book, however, that in the end Bob Marley found his personal Zion in the Ethiopian Orthodox Tewahedo Church, into which he was baptised  not long before his death. It seems a rather strange omission, given the theme of the book.

Raboteau then visits Ethiopia, and Rastafarian settlements there, and looks at the relations between the incomers and the native Ethiopians. Then Ghana, where many African-Americans, influenced by Marcus Garvey, sought their home and promised land, only to find that most the the Ghanaians saw America as the promised land, and would sacrifice a great deal to go there.

What I found particularly interesting there was her descriptions of different perceptions of history. I've never been to West Africa, but did read something of its history both for a university degree and afterwards. West Africa is where many of the slaves who were taken to the Americas in the 17th to 19th centuries came from. And African Americans, many of whom were descended from those slaves, had n inaccurate perception of the slave trade.

That was something I became aware of through participating in the question & answer web site Quora, where many of the questions asked about the slave trade showed an anachronistic understanding of history. Emily Raboteau, as a historian, is aware of these attitudes, and examines them critically, from both a historical and personal point of view. The perception of many African Americans seems to be that slavery was a result of racism. But it is really the other way round -- racism is, in many cases, particularly in North America, a result of slavery. The slave trade was in fact an example of entrepreneurship, and slave traders, both black and white, were in it for the money (those words are mine, not Raboteau's, but it is my summary of what she was saying on the subject).

Emily Raboteau returns to the USA, and visits a Neopentecostal prosperity church, which for many black Americans seems to offer a different kind of promised land, exalting exactly the same human impulses that led to the slave trade. And finally she visits the US South, recently ravaged by Hurricane Katrina, where many of her own relatives have become displaced people, but her cousin refuses to speak the language of victimhood and says they are not victims, but survivors.

In reading it, I was reminded of some other books I had read: The long Road Home by Ben Shephard, about people who were displaced after the Second World War, many of whom had no homes to return to. The second is From the Holy Mountain by William Dalrymple. about following in the footsteps of a couple of pilgrims of antiquity, and visiting the places they visited in modern times. It, like Searching for Zion, bring the personal touch to history, and Emily Raboteau's odyssey is a personal pilgrimage as well as a study of other pilgrims.

Another book that this one reminded me of was The Anatomy of Exile, which I read just after being deported from Namibia in 1972. That was the second major occasion in my life that I was driven to wonder who I was and where I belonged. The first was when I had to leave South Africa in a hurry to travel to the UK to study in 1966. Themes of home, identity, exile, belonging and pilgrimage became prominent then, but I have dealt with these in other blog posts, like What is African: race and identity.

Other historians, and sociologists and anthropologists have written about displaced people, or people searching for a promised land, or people wondering where they belong, in a dry, objective and academic manner. But Emily Raboteau does not. She looks at the history from both sides, and analyses her own reactions, and this is what makes the book really worth reading. She tells other people's stories well, but gives her own reactions to those stories and weaves them with her own story. People talk about narrative theology; this is narrative history.