Stephen Hayes is a South African author of both fiction and non-fiction books.

This page provides links to descriptions or reviews of his books.

Of wheels and witches

Of wheels and witches is a novel for children aged 9-12. Set in the southern Drakensberg of South Africa it tells the story of four children who discover a plot to accuse the father of one of them of witchcraft. Jeffery, Janet and Catherine travel with Sipho to warn his father of the plot against him. It is the first of a series of three stories.

The Enchanted Grove is a sequel to Of Wheels and Witches, also set in the southern Drakensberg about 6 months later, in the summer of 1964. Jeffery, Janet and Catherine find they have to deal with bullies, poachers, political dirty tricks, and the same witch that they had encountered before. It was published in March 2021, and is available both as an ebook and as a paperback. The books do not necessarily have to be read in order.

With the same main characters as Of Wheels and Witches and The Enchanted Grove, in Cross Purposes Jeffery and Janet travel to England for a reunion with Catherine and Sipho, and they explore Oxford and London together. Catherine's grandmother gives her a family heirloom, a jewelled cross. The children all travel to Italy for a seaside holiday arranged by Jeffery's parents to celebrate his twelfth birthday, but they are diverted to an unknown destination as Catherine's cross seems to be sending them mysterious messages warning of danger.

The Year of the Dragon 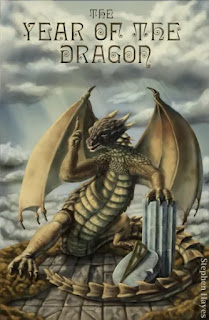 On a farm in the picturesque southern Drakensberg of South Africa a woman dies, and a young lawyer, Richard Rutherford, and his friend Denis Walters combine business with a pleasure weekend in the mountains. They will visit the farm to take the first steps in settling the estate. They soon discover that others also have an interest in the estate, or at least some items in it, and that they are prepared to kill for them.

The contentious items seem to be some old Russian ikons, but how they got to a remote farm and why others are so anxious to get hold of them is a mystery. The search for answers leads them to a strange hermit and an even stranger priest, and a drive of a thousand miles in search of King Lobengula’s legendary treasure.

Buy the ebook here from Smashwords and other retailers.

Stephen Hayes lives in the City of Tshwane in Gauteng, South Africa and is a deacon in the Orthodox Church. He is retired from working at the University of South Africa as a lecturer in Missiology and an editor of academic texts.

The following web links also have more information about Stephen Hayes and his writing: