I've commented before on the current fashion, in some circles, for having headless male torsos to illustrate book covers -- see Urban fantasy, mediocrity, and the male torso | Notes from underground, but now that I'm thinking of revising and reissuing one of my children's books with a new cover, I'm wondering about the possibilities.

This seems to be a fairly common theme for a cover nowadays...

... though one wonders what the faceless characters are like in the book. 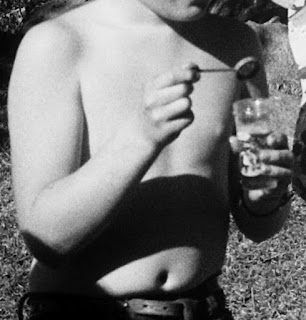 So I'm wondering if my revised children's adventure-fantasy story should follow a similar theme, something upon these lines.

How important is it that book covers should follow the latest fashions? Will it enhance sales if the book has a headless torso, and diminish sales if it lacks one? And who is attracted to books with headless torsos anyway? Does anybody know?

If I give that picture to a book-cover designer, would they be able to turn it into a suitable cover design? Does it matter that the kid in the picture is blowing bubbles? The protagonist in my story doesn't blow bubbles, but he doesn't lack a head either, in the story.

Are there any other important tropes in book covers that one needs to take into account? If so, what are they?

Writing a Thriller by Andre Jute
My rating: 4 of 5 stars

One of the things that I am still a bit confused about is literary genres, and people seem to have so many different names for them that it gets very confusing. Some are used by publishers to say what kinds of books they do or don't publish, and those are reasonably clear -- crime, romance, children's etc. So when I found a couple of books on writing thrillers in the local library,I read them to try to answer the question "What is a thriller?" 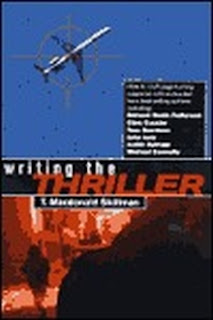 The first one I read, Writing the Thriller (my review here), was also because I was doing a final edit on my children's book, The Enchanted Grove. My book is an adventure story, rather than a thriller, but where does one draw the line? And even adventure stories have thrilling scenes in them, where the characters are in danger, don't they?

Writing a Thriller by Andre Jute at least answered that question for me. The adventure story has the characters in danger from external enemies. In the thriller the situation is complicated by betrayal from within. The thriller is therefore more complex.

The only problem with that definition is that many books advertised as thrillers might not actually be thrillers.

I found this book more useful for clarifying that and similar questions that I had. But it is also an older book, and may not be so useful to would-be thriller writers in the information it gives on the publishing process and manuscript submission. Clearly, it was written when word processors were in their infancy, and assumed that most people would be typing their story directly onto paper, and editing the paper typescript, and cutting and pasting literally with scissors and paste, and not in the sense of the Microsoft Windows metaphor.

The book also cites some of the thrillers that the author himself has written as examples, Reverse Negative and Sinkhole, but I notice that neither has a single review or rating on GoodReads. And, on a personal note, the author seems to have a strong prejudice against missionaries, and as a missiologist, I have a particular interest in missionaries, but that is just a personal prejudice and shouldn't affect one's evaluation of the book.

If you're thinking of writing a thriller, it could be a useful book to read, bearing in mind that it deals with dated technology. But the actual writing advice is generally useful.

View all my reviews
Posted by Steve Hayes at 18:20 No comments:

Odd how thoughts develop. I find myself humming the tune of What a friend we have in Jesus, and the name Joseph Medlicott Scriven pops into my head. He wrote either the words or music, I forget which, and I know that because it was printed in the Methodist Hymn Book that we had at St Stithians College. And I recall that the first line of the preface said "Methodism was born in song". So that is the main thing I know about Methodism. I did learn some things in my six years at St Stithians, and those are some of them.

Then last night I had an interesting dream, well interesting to me at least, it's probably boring to most people.

I was at a conference (why do I always dream about conferences?) where we were all issued with fat books containing a report on South African Foreign Policy, and I rejected it because it immediately made me think of Pik Botha, then wondered why I thought that, because Pik Botha has been dead for years and has had no
influence on foreign policy for a long time. 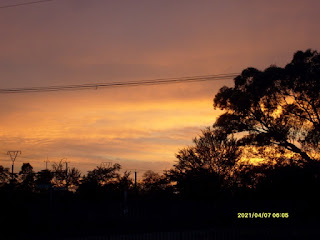 Anyway, that's what I wrote in my diary today. We write mostly boring stuff like that in diaries because under Covid lockdowns we don't go out much and nothing much happens. We hear what our friends are doing on Facebook and other social media, and we post pictures of sunrises and sunsets, Here's my picture of the sunrise this morning. I posted it on Facebook too. My cousin Jenny in Durban did get out today, however. She went to the dentist. She posted a picture of a tollbooth in the rain which she passed on the way.

Speaking of Pik Botha, one of the best political jokes I've ever heard was about him.

But then I haven't seen Guronsan-C advertised for a long time. It was advertised as something that could revitalise decrepit old fogeys like me.

But the best thing that happened to me today is that Dan'l Danehy-Oakes read one of my books and wrote a review of it. If you're a member of GoodReads and feeling benevolent, go and read and "like" his review. If you're feeling especially benevolent, you could comment on it.

Phil Gentry
@pmgentry
·
Apr 5
A professor of mine went to go hear Derrida speak once. The entire talk was about cows; everyone was flummoxed but listened carefully, and took notes about...cows. There was a short break, and when Derrida came back, he was like, “I’m told it is pronounced ‘chaos.’”

I once went to hear Derrida speak. Should I put that on my CV?

Have a nice uneventful day!