The day Desmond Tutu rode on my bus

When Anglican Bishop Desmond Tutu died at Christmastide 2021, lots of people were sharing their memories of him on social media, and I hope those memories are preserved, at least for the use of a biographer, for someone like Desmond Tutu surely needs a biography. The life and times of Desmond Tutu are the most critical in South African history. He saw the whole period of apartheid, and more than 25 years of what followed, and much in his life illustrates and epitomises that period.

I had already written most of my memories of him when he retired, and I've mentioned him quite a lot in my blogs, but there is one incident that perhaps deserves to be told in a little more detail, as illustrating his life and the times he lived in. It was Tuesday 5 December 1961, the day Desmond Tutu rode on my bus.

In 1961 I began working as a bus conductor for the Johannesburg Transport Department,. It was the year when South Africa switched to decimal currency in February, became a republic at the end of May, and held a general election in October, the fourth since the coming of apartheid, in which the National Party increased its majority. For the National Party it was a triumphant year. Not only had they achieved their Republic, but they had had the first general election since Union in which black voters had no say at all, because the "Natives Representatives" had been abolished the previous year. 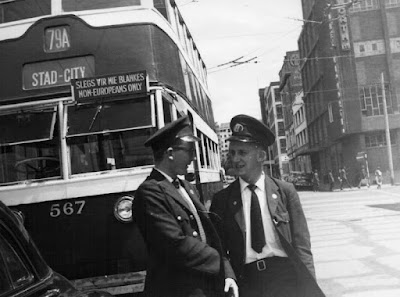 And on 5 December 1961 Desmond Tutu got on the Parktown North bus on which I was conductor. The bus was a two-man operated BUT 6-wheeler trolley bus, with a staircase at the back leading to the top deck, and long sideways seats  over the back wheels, where Desmond Tutu was sitting. When I had finished collecting the fares, I stood on the back platform, because there were few new passengers whose fares needed to be collected, and my job was simply to give the right-of-way signal to the driver (two rings of a bell), when all the passengers had safely disembarked. So when I wasn't doing that, I chatted to Desmond Tutu.

I had known him for a little over two years then, mainly from Shoe Parties at St Benedict's House in Rosettenville. In 1959 Desmond Tutu had been a student at St Peter's Theological College in Rosettenville, and as it was just over the road from St Benedict's House, many of the students came to the monthly Shoe Parties, as did people from Anglican parishes all over Johannesburg. We had also both been members of the Postulants Guild, for those in the Anglican Diocese of Johannesburg who thought they might be called to serve in the ordained ministry of the Anglican Church.

He was then a deacon, and was on his way to see the bishop, Leslie Stradling, to discuss his ordination as a priest, which took place 12 days later, on 17 December.

The bus trip to the stop for the bishop's house, near the Johannesburg Zoo, only took about 20 minutes, of which we only chatted for about 10 minutes, when I'd finished collecting fares. Our chat was mainly about church things -- his impending ordination as a priest, what Leslie Stradling was like as a bishop (he was relatively new at the time, having been enthroned as bishop only two months before). Neither of us envisaged that within 25 years Desmond himself would be Bishop of Johannesburg.

What was significant about our conversation was not what we said, but that it took place at all, especially in the year of the triumph of the Spirit of Apartheid.

When Desmond got off the bus and we waved goodbye and I said I would see him at his ordination, and as soon as the bus pulled away from the stop, the other passengers began asking me "Who is that man? How do you know him? Why were you talking to him? Where does he come from? Where do you come from?"

If I had had foresight I could have said "That man is the future Anglican Archbishop of Cape Town," but of course I didn't and I just said that he was a deacon going to see the bishop about his future ministry as a priest.

But where did he come from? Where did I came from?

The passengers didn't believe me. We must have come from overseas somewhere.

"Where are you from? France? Germany? America? Is that man an American Negro?"

It was simply inconceivable to the man on the Parktown North omnibus that a black South African and a white South African could have a normal human conversation in Johannesburg in 1961, the year of the triumph of apartheid. In 1961 South Africa was indeed a very strange society, in which normal behaviour seemed abnormal, even to normal people. But that was the society in which Desmond Tutu lived half his life, a society in which we used to sing at the time:

It noted that "There are more things in heaven and earth than are dreamt of in any of the philosophies currently in use. Nil illegitime carborundum, which is hot dog
Latin for 'Don't let the bastards grind you down'".

In the article Irving John Good lists the kinds of people who might be against the publication of speculations:

And those likely to be in favour...

So there is generally a difference between a blog post and a scholarly article that appears in an academic journal. Peer-reviewed academic journals don't usually favour the publication of half-baked ideas and those articles that contain half-baked ideas are rarely recommended for publication. I recently had to decline an invitation to write an article for a scholarly journal because to do it justice I would have had to do a great deal of research, including, probably, travelling to various parts of sub-Saharan Africa. But I no longer have access to an academic library (owing to bureaucratic bungles over renewal of books at the Unisa library) and can't afford to travel to all the necessary places, even if we weren't living in a time of Covid.

But I think the publication of half-baked ideas in media such as blogs can stimulate discussion, and perhaps stimulate other people to bake them.  The discussion can begin in blog comments, and the debate can continue in other media, like mailing lists and other forums, online or offline.