Chocky by John Wyndham
My rating: 4 of 5 stars

Back in the 1960s, when I was young, I read quite a lot of science fiction. and in many ways the 1950s and 1960s were vintage decades for science fiction. Later I rather lost my taste for it, or else the genre itself changed, and the newer productions did not appeal to me so much. One of the sf authors I liked most was John Wyndham. I recently re-read a couple of his novels to see how well they had stood the test of time, and found them surprisingly old-fashioned. In hindsight, the writing seemed to have the flavour of the 1940s, very much mired in the time it was written, like the writing of Nevil Shute. 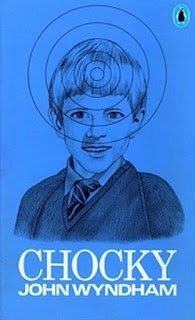 But when I found Chocky in a second-hand bookshop, I was interested because I had not read it before, and it was also published later than most of the others, in 1968, which was the year of student power and student revolution. So I wondered what the atmosphere of the story would be like. And it seemed to be describing British middle-class life in the mid-1950s.

One of my reasons for reading it now is that I am writing a series of children's novels set in the 1960s, and so I am interested in books published in that period, and the kind of language they used. One of the ones I've looked at is The Weirdstone of Brisingamen by Alan Garner. In that one, the language has hardly dated at all, and it could have been written in almost any decade since then. Not so the works of John Wyndham.

Another thing that I found interesting from the point of view of a writer is that several of the people who have read my children's books have commented that in the stories the children seem to have a lot of freedom, and are allowed to roam around freely without adult supervision. They have suggested that this makes the stories seem rather unrealistic. So I was interested to see that in Chocky Matthew and his sister Polly are given what is possibly an even more unrealistic degree of freedom, even after being in danger. And this in a book that is not merely written about the period, but in the period itself. 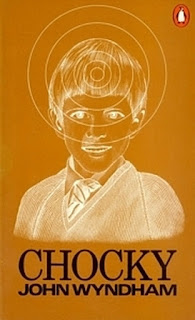 His parents are worried because "hearing voices" could be a sign of mental disorder, and their concern makes Matthew sometimes wonder if he is going mad. Then his teachers at school start complaining about his school work. He starts solving mathematical problems using unorthodoc methods, he argues with his geography teacher about the location of earth, and with his physics teacher about the speed of light.

The end of the story is predictable and slightly disappointing, and the thing I liked most about the story was the attitude and character of Matthew himself.

There is one other respect, however, in which the story seems dated, and especially not fitting its 1968 publication date, and that is the sexist language. I've read many other 1960s authors, and few of them are as sexist as this. Yet another characteristic that adds to the 1950s "feel" of the book.


View all my reviews
Posted by Steve Hayes at 18:15 No comments:

Elon Musk, before you wreck Twitter, heed what happened to Yahoo! Tumblr & other Internet flops

I watched a TV news report about the upheavals at Twitter, and Elon Musk's plans for revamping it and his firing of more of the staff, which have got a lot of Twitter users in a bit of a tizz, wondering whether their fears that it is about to collapse are justified.

I suspect that a lot of their fears are justified. It has been very common in Internet history for a web site that does one thing, and does it well so that it attracts a lot of users, to be taken over by someone bigger and then wrecked, so that it no longer does the thing that made it successful in the first place. Or if it does do that thing, it does it badly and then flops.

One of the companies that specialised in doing that sort of thing was Yahoo! It was very big and a power to be reckoned with on the Internet about 20-25 years ago. It started off as a search engine, but when Google produced a better search engine they decided to diversify, and started buying up other web sites that did one thing, and did it well. Nothing wrong with that. But then they started to mess with those web sites without apparently understanding what had made them popular and successful in the first place. The list of things they took over and wrecked is a long and a sad one. Here aree some of them:

Yahoo! lost an enormous amount of goodwill through this, and is now a shadow of its former self, and now Twitter users fear that something similar will happen to Twitter. Let Elon Musk study what happened to Yahoo! and learn from its history before he repeats their mistakes.

There have been plenty of other examples; they are not limited to Yahoo!

There was Technorati, a kind of communal blog tagging site. You could visit the site to see who had tagged particular themes in their blogs, and when. You can do something like that with search engines, but Technorati was much more efficient. You could find the most recent blog tags on a topic. But the people who took over Technorati had the Facebook mentality. They wanted people to stay on their site. Facebook doesn't object to people going to other sites if the owners of those sites advertise on Facebook, but if you post a link to a blog post on Facebook, Facebook will show it to very few people unless the first few people react to it by "liking" it. Technorati tried to do something similar, which was totally counterproductive. People went to their site to see what blogs had similar tags. The new owners tried to get people to stay on their site by providing articles to rival the blog posts, which they simply could not muster the expertise to do. As a result, people stopped visiting their site. They did one thing well, got greedy, and stopped doing the one thing they did well, and tried to do something else badly. Elon Musk, take heed! It doesn't work.

Another example is Tumblr. It offered a lot of attractive features. E-mail posting, blog aggregating, and so on. At one time I used to put my Tumbler address in my email signature, because I could tell people that if they went to Tumblr they could see all my stuff, It had links to all my recent blog posts on other sites too. But none of that works any more, and as a result I haven't visited Tumblr for months, perhaps years.

I'm not saying Twitter can't be improved. It does one thing well, but it could do it a lot better. Its algorithms, for example, can be enormously frustrating to users, and create a very bad user experience (#UX). So Twitter users have to spend quite a lot of time and energy trying to work around the algorithms, and resent being manipulated by them. The current crisis has helped to make a lot of Twitter users aware of a rival outfit, Mastodon, which is algorithm-free.

But before making changes, make sure you understand why people who use Twitter are there, and don't alienate them in the hope of attracting others -- Yahoo! Technorati and Tumblr tried that, and failed. A bird in the hand is worth two in the bush, 

Blogger now won't let me enter anything in the search box.

Are the people at Google out to kill Blogger and blogging?

Why this reduced functionality?

They made the "Blog This" function post garbage. See, for example, my Simple Links blog, which I used as a straight blog, that is, a web log of sites visited that I might want to refer to again. The "Blog This" feature worked well for that purposes, as well as for quoting extracts from other sites to quote in blog posts. Then Google decided to "improve" it, which made it useless for any purpose at all -- have a look at Simple Links to see how "improved" it is.

They made the editor a lot more difficult to use too. So much so that I went back to LiveJournal, until they decided to go one better than Blogger by making their editor not only more difficult but impossible to use.

All the blogging platforms seem to be in an intense rivalry to produce the worst UX (user experience) ever.