Mugabe, Malema and the future of South Africa

The death of Eugene Terre'blanche stole the news over the weekend and drew public attention away from something far more ominous for the future of South Africa -- Julius Malema's visit to Zimbabwe. 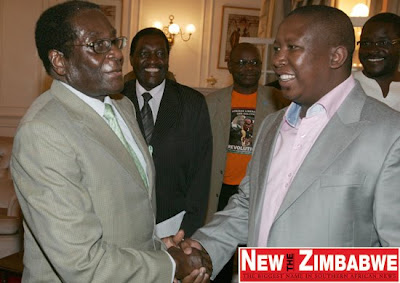 Mugabe met Malema -- who was concluding a four-day visit to the country as a guest of Zanu PF -- at State House for over two hours on Monday.

With reporters present, Mugabe spoke to Malema at length about Zimbabwe’s land reform programme and what he said was Britain’s failure to honour its obligations to white farmers whose properties were seized for resettlement.

Mugabe also praised South Africa as an unstinting ally against what he said was a global crusade by “imperialists” to remove his government through economic sabotage and propaganda.

Former President Thabo Mbeki was frequently criticised for taking a low profile on Zimbabwe, and refraining from public criticism of the fascist Mugabe regime.

Julius Malema has shown no such restraint, and has shown his true colours by praising the Mugabe regime. And this is a clear indication of one scenario for South Africa's future: Julius Malema becomes president (possibly succeeding Jacob Zuma), and then it's goodbye to our hard-won democracy. Perhaps in another 15 years time there will be South African refugees sleeping in the Methodist Church in Harare.

Look at what has happened.

Malema is welcomed in Zimbabwe, and praises the leadership of the Zanu-PF and Robert Mugabe. In South Africa he has attacked the trade unions and Cosatu, and just a few years ago, far from meeting Mugabe, a Cosatu delegation was turned away at the Zimbabwe border.

The white, Western and capitalist press has concentrated its criticism of the Mugabe regime on its "land reform" policies, which has entailed the seizure of land from white farmers, and its redistribution among relatives and supporters of high-ups in Zanu-PF.

But long before that, Mugabe attacked the trade unions, which was of less interest to the white, Western and capitalist press.

To understand this one must go back to the 1990s, when Mugabe sent Zimbabwean troops to intervene in civil wars in the Congo. In these foreign military adventures he resembles Tony Blair and George Bush, whom he professes to dislike. In reality, they are birds of a feather.

Foreign military adventures are expensive, and depleted Zimbabwe's foreign currency reserves. This in turn led to fuel shortages, which in turn led to an economic recession, particularly in the towns. Businesses were closed, workers were laid off, and the Zimbabwean trade unions were up in arms. Opposition to Mugabe's policies grew, and in a referendum some constitutional amendments that would, among other things, have made Mugabe president for life, were rejected by the electorate.

This was a wake-up call for Mugabe. If he could lose a referendum, he could also lose an election.

But instead of reversing the unpopular economic policies that had caused the problem, he exacerbated it by instituting his land redistribution scheme as an electoral ploy to buy the rural vote. If Mugabe were sincere about land reform, he had had 20 years to do something about it, and had done nothing. It was only the threat of losing an election that made him bring it in hastily, for the purpose of buying votes. And in the way it was implemented exacerbated the economic problems as Zimbabwe's agricultural productivity plummeted. The foreign exchange problems worsened as tobacco, the main export crop, virtually disappeared. In a couple of years Zimbabwe went from being the bread basket of central Africa to basket case, as hyperinflation took hold.

The opposition grew stronger and reorganised, and coalesced around the trade unions, to form the Movement for Democratic Change (MDC). And they have a natural affinity for Cosatu in South Africa, which is why the Cosatu delegation was turned away at the Zimbabwe border.

But who is Malema talking to?

ANC Youth League president Julius Malema has upset the Zimbabwean political party, the Movement for Democratic Change, by meeting only Robert Mugabe's Zanu-PF on a visit to Harare.

'Is Mr Malema saying that the ANC does not respect democracy and is willing to ignore the millions of Zimbabweans who sent Zanu-PF packing in the corridors of power?' asked Austin Moyo, chairman of the MDC in South Africa, at a media briefing in Johannesburg on Thursday.

'Does Malema understand that there are millions of liberation heroes in the MDC?'

Moyo said Malema made it clear that he would be visiting the Zanu-PF because it was 'a revolutionary party'.

At the moment Cosatu is still allied to the ANC in the tripartite alliance, but if Malema should ever become president Cosatu will have the choice -- become a lapdog, or follow the Zimbabwe trade unions into the political wilderness, and form an equivalent of the MDC.

CONGRESS of South African Trade Unions (Cosatu) general secretary Zwelinzima Vavi yesterday said the bilateral meeting with the African National Congress (ANC) next week would be an opportunity to deal with how the ANC's actions had threatened Cosatu's functionality within the tripartite alliance.

ANC Youth League (ANCYL) president Julius Malema's public mudslinging against Cosatu, the ANC's unilateral decision banning municipal workers from taking up leadership positions in political parties, and a 'general lack of commitment by the ANC to make the federation one of its political centres', had left the alliance in a crisis, Vavi said at the National Union of Metalworkers' National Bargaining Conference yesterday.

'The oppression and super- exploitation of workers remains widespread - despite government and union efforts.

What South Africa lacks, and probably needs, is a strong and coherent left opposition, preferably before a fascist takeover. Is Zwelinzima Vavi up to it? The tragedy of the assassination of Chris Hani continues to haunt us.

And perhaps Thabo Mbeki kept quiet because he saw how easily what was happening in Zimbabwe could happen in South Africa, and lead to the break-up of the tripartite alliance. He preferred the Ronald Reagan approach of "constructive engagement".
Posted by Steve Hayes at 04:20

If Mugabe were sincere about land reform, he had had 20 years to do something about it, and had done nothing.

... seems very like Blair and Brown's pre-election promised reforms. 13 years to do them, didn't bother.

this is bullshit , south africa is not a circus , we were bord and bred in sa especially --pretoria ,.we are not going to allow idiots to run us , what about the future of our kids .umless we kiss the whole world .. good bye

Well, all I can say is that I'm so disappointed at the increase in shacks in Durban! We've got our democracy that was fought for tooth and nail, only for 'those' Black people, better educated than their less fortunate fellows, to milk the 'new South Africa'- as if government itself isnt milking it- Zuma and his 20 wives? Sorry, I want to cut the bullshit and speak layman terms here, no big words nor big analysing thesis. So who's voting for whom? The common people still putting faith and trust in the likes of Malema cos God only knows what his calling card is- and the people are buying it!The poor people!! Hopeful, people.People who still dont have proper homes, hot water , toilets- basic needs to get by each day.
I cried when we became one, but man, that was a big lie. NO equality, apartheid in reverse, fat cats lining their pockets, corruption, no regard for another irrespective of colour. South Africa was Clean, Bright and people still Smiled despite segregation. I hoped that once the segregation was gone, the cleanliness, beauty, smiles etc would've increased 10 fold. Instead,South Africa is filthy, far too expensive for what's on offer( A joke ,really especially when you consider the pathetic presentation of basic fruit, veg and services-costs even more than the pound when converted!We have lost far too many skilled folk who saw all this coming!-And, they were not wrong. Sad to leave their homeland, but they did! Look at the destruction of our beautiful, clean bright South Africa. Zimbabwe is a very good example of greed, power and destruction. Dont be fooled by the 2010 WCup performance! The reality of SA is masked by very dangerous powers that be. It's all about the money!!! And as for the likes of Julius Malema- wanting to keep the fires of hate burning-then SA has a very explosive combination. People of SA, rise up- Apartheid- on paper is gone. There's another war to fight!!! Greed Hate and Corruption needs defeated!!!!X