I've written a new novel, Cross Purposes, was released as an ebook on 22 October 2022. It is available from Smashwords and other ebook retailers here.. 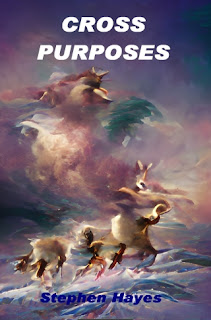 It's intended to be a children's story for kids aged about 9-12, but adults who like books like C.S. Lewis's Narnia stories or books like The Weirdstone of Brisingamen by Alan Garner might enjoy it too.

The main characters, who appeared in my earlier books Of Wheels and Witches and The Enchanted Grove,  are Sipho Mdluli (13), Jeffery Davidson (12), Janet Montgomery (11) and Catherine Kopirovsky (10). Catherine is given a jewelled cross by he grandmother, an ancient family heirloom from Russia, which gives them mysterious signals when they go on holiday together. At first they think it might just be warning them of danger, but later it seems to be leading them on a quest, whose nature they must find out as they go along

I quote from one review (well, the only one so far, but I won't link to it because it has too many spoilers):

These books seem to me to be what (Charles) Williams might have written, had he been spared to do so, if he had decided to write children's novels, somewhat under Lewis's influence, South African children in the early 1960s (with, yes, all the social and political baggage that implies). They have (to me) the same sense of the blurring of the natural and the supernatural so that the natural becomes numinous and the supernatural sensorily immediate that I love in Williams.

You will be at a *slight* disadvantage if you start with this one; it is about four characters established in the earlier novels, and, perhaps as a courtesy to those who have read those other books, does not spend as much energy in setting up the children as another writer might. There are no plot summaries to explain how they, and especially Sipho, met and became friends; you just have to take it as given.

The stories are set in the mid-1960s, which is when apartheid was at its height in South Africa, so in a way that makes them historical novels, because any children, even South African children, who are in the age range of the target readership will have had no experience of what apartheid was like, and part of the aim of the first two books was to give children who didn't live through it some idea of what it was like to live under apartheid.

This isn't really the aim of Cross Purposes, though, because most of the action takes place outside South Africa. But I've tried to make the historical background as accurate as possible without being too didactic about it.

This one is less ambitious than the immediately preceding one in the series, The Enchanted Grove. I made that one available in hard copy, and asked my son (an artist) to design a special cover, and made it available in a paperback edition as well, but it didn't sell enough copies for me be able to buy enough copies to send to the copyright libraries, never mind pay my son for the cover design. So this one is less ambitious: ebook edition only, and an el cheapo abstract cover. In the unlikely event of the sales of this one covering the production cost of The Enchanted Grove, I may think about new paperback editions of the other two with better covers. The only way that can happen is if this one gets a lot of good reviews.