This morning I had a phone call from SABC Radio 2000. They are doing a series of broadcasts on transport, and tomorrow they are doing trolley buses, and somehow they found my trolley bus web page, so they want to interview me tomorrow. 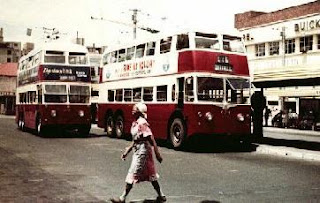 Well, that's rather nice. I'm happy to talk about trolley buses, though they haven't been seen in South Africa for the last 25 years or so. They are still going strong in other parts of the world, and the fleet in Athens was entirely renewed for the 2004 Olympic Games.

The Johannesburg trolley buses shown in the picture are not nearly as fancy and modern as the new Athens ones. The one on the left is a BUT Series II, which joined the fleet about 1956-1958, and the one on the right is an Alfa Romeo-Ansaldo, which came about 1959. At the time the Ansaldos were among the biggest city passenger buses in the world, with a capacity of about 112 passengers.

Our provincial premier, Mbhazima Shilowa, likes to talk about an integrated and holistic transport plan for Gauteng, and initiated the Gautrain rapid rail project. But that on its own will do little to reduce the traffic congestion on the roads. The train needs to have other forms of transport feeding it, and I wish that trolley buses formed part of that plan.

It would be good to see a network of trolley bus routes spreading out from each station on the Gautrain routes, getting people from the trains to work or home, and meeting with minibus taxis further out. The thing to bear in mind is the road space occupied by a double-decker trolley bus and a minibus taxi, to reduce the congestion around the stations.

And even more important would be to do a transport survey of Gauteng, to find where people live, and where they work, and how they travel between those places at present. Only then can a truly integrated transport plan begin to take shape.
Posted by Steve Hayes at 17:50

I can remember trolly busses from Pretoria Central to Brooklyn Circle when I was a youngster, never rode one though.