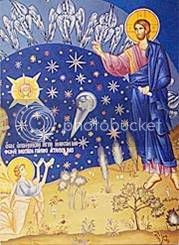 Sally's Journey: Ecology, responsibility and mission, has some images relating to creation. One showed a leaf, with a face that reminded me of a praying mantis. The other, from Matt Stone, Lord of the Fertile Earth, shows Jesus as the Green Man, crucified.

Sally asked for comments, and I said that neither of those images really spoke to me. But at the same time I do believe that we need some images that can speak to the theme of Ecology, responsibility and mission. These images of creation speak to me of one aspect of it.

I don't think the first picture was intended to look like a praying mantis. That was just something it reminded me of. But it is sometimes said that |kaggen, the creator God of the San, the earliest human inhabitants of South Africa, sometimes took the form of a mantis. 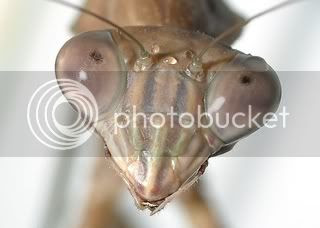 The San, who were called Bushmen by white settlers, lived as hunter-gatherers, and painted numerous pictures on the rocks and caves of South Africa, but for the most part the meaning of the pictures was not preserved when the San were driven out by the white and black pastoralists.

Trevor Verryn, in his book Symbols and scriptures gives an acount of some preserved explanations that were written down from San informants from the |Xam people of the Drakensberg, whose totem was the eland, and told the story of some of the paintings. The story of creation and fall according to at least some of the San was thus preserved. 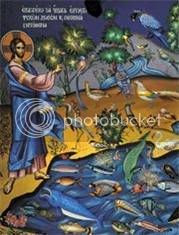 |kaggen (God) gave orders and caused all things to appear - sun, moonm stars, wind mountains and animals. |kaggen reprimanded his wife who spoilt his knife by using it to sharpen her digging stick, and as a result she brought forth an eland calf. One day |kaggen's son shot the eland, and |kaggen mourned for it. So |kaggen mourned for the evil that had befallen his creation.

This is a very abbeviated account, but it shows God mourning for his spoiled creation. But the mantis too is a creature. If it is a symbol of God, it is yet not God. I'm not sure that a mantis is an appropriate image for a wounded creation.

I found Matt Stone's image of the crucified Green Man also didn't really speak to me. It seems to mix two incompatible concepts, though I can't really put a finger on it. Maybe some others have some ideas on how they relate or don't relate. 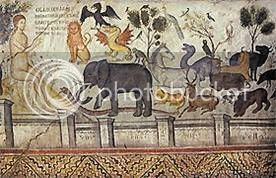 I suppose one of the reasons that it doesn't speak to me is that the symbolism is obscure. Until the 1930s the name "The Green Man" was used for pubs, and it was only in the 20th century that it began to be applied to the foliate heads found on medieval churches. Of course that is one of the advantages of postmodernity -- one can make up traditions and symbolisms to mean anything one wants. But to me, at least, a crucified green man just doesn't seem to fit.

But when it comes to ecology, the image of Adam naming the animals seems to fit better. Perhaps he was the original green man!
Posted by Steve Hayes at 02:36