What is this thing called Love? 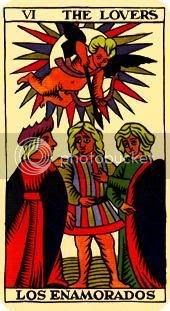 The Tarot card originally called "Love", later "The Lovers" originally showed a man and a woman with Cupid aiming an arrow at them. Later a third figure was added, so that there were two women, one beautiful, the other ugly. Some saw them as allegorised into vice and virtue.

In a recent post on this blog (Fr Alexander Schmemann in Russia), I mentioned Father Alexander Schmemann's theological writings. One of the things he wrote about was marriage as the sacrament of love. Human love is the reflection of God's love, and it is through the experience of human love that we can relate to God's love. Schemann notes that many people sentimentalise marriage, and make the mistake of thinking that the "content" of the sacrament is "family", and so miss the main point; that it is love. One of the problems in the world today is that some people have idolised the family.

Nevertheless, family is important. A book that illustrates this is John Bowlby's Child care and the growth of love, which demonstrates that children who do not experience loving relationships with parents, especially their mothers, in the first six months of life, find it far more difficult to form loving relations with other people in later life.

By our own behaviour, we often create this problem. Though wars, we make children orphans. Through systems like migrant labour coupled with influx control, which prevailed in South Africa for many years, children are effrectively deprived of parental love. They are more likely to become juvenile delinquents, child soldiers, adult criminals and abusive spouses and parents. In such a way the sins of the fathers are visited on the children, even to the third and fourth generation.

Schmemann points out that in Christian marriage, husband and wife become king and queen to each other. There is a small kingdom, a reflection of the heavenly kingdom. The possibility may be lost, perhaps in a single night, but it is nevertheless there. And he gives a moving description of a couple of old people sitting holding hands on a park bench, all battles past, all passion spent, but still an image of love.

St John summed this up when he said, "herein is love, not that we loved God, but that he first loved us." In order to be able to give love, we first have to receive it, and even if we have received no human love, we can still receive the love of God, though of course it is much more difficult. But having received the love of God, we need to give love, in order to enable others to love. "Freely ye have received, freely give." Too often human love dies when people say that they no longer "feel" anything for each other. But love is more than an emotion or a feeling. We do not show love or give love by having loving "feelings" about other people. We show love and give love by loving actions, even contrary to our feelings.

To return to the Tarot card: Cupid's arrow may strike, and we may have overpowering feelings of love towards another person. If we are lucky, they will be reciprocated. But that is not enough to lead to the couple Father Alexander Schemann saw sitting on the park bench in the evening of the day, in the evening of their lives. That takes more than just those first feelings.

In a beat generation novel by John Clellon Holmes, Go one of the characters, Stofsky, has a dream of meeting God, and God tells him "Go, and love without the help of anything on earth". And that is surely the only thing that can turn back the tide of hatred that threatens to engulf the world.

List of synchronised blogs on the topic of Love -- visit them!

Thank you for joining my MyBlogLog Community!

I love your blog. I am a Christian too.

Like this Steve, love is a choice as well as a feeling- and sometimes the choice is the stronger element....
Like the Tarot illustration too :-)

You mentioned war as one reason for a generation of children to grow up with a parents love...and rightly so.
The AIDS pandemic in Africa is also leaving an entire generation without fathers or mothers.

oops, that's suppossed to say "without a parents love"

Thank you. I love the idea of husband and wife becoming King and Queen of their own mini kingdom, itself a reflection of God's kingdom. A very helpful perspective.

What a great ceremony Steve!