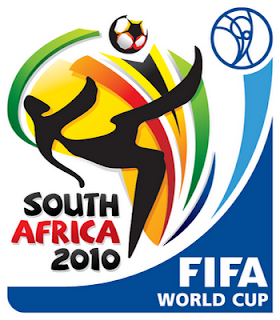 Winter arrived today, with snow in several parts of the country. They say it's the first winter World Cup for several years. We watched Italy playing Paraguay last night, in Cape Town, in pouring rain. Cape Town, having a Mediterranean climate, is in the winter rainfall area, so the Italians must have felt right at home. I'm not sure about Paraguay, though.

We live in the summer rainfall area, so no snow around here (the picture below was taken in the Eastern Cape, and someone there e-mailed it to my wife). So we had bright winter sunshine, but there was a chilly wind, and no warmth in the sun at all. So it's a good time to test our new solar geyser. And the water was warm, but not very hot. Good for a quick shower, perhaps, but not a long soaking bath.

Meanwhile, our daughter in Athens wants a vuvuzela. Apart from tootling it when South Africa scores a goal, she wants to use it when her noisy neighbours have those parties that go on till 4:00 am. She said the ones they sell in Greece have mutes in them.

And they are spreading to other sports as well. Our local rugby team, the Blue Bulls, were playing in the final of the Super Fourteen tournament, and their home ground, Loftus Versveld, has been taken over for the soccer World Cup, so they held the final in Orlando Stadium in Soweto, accompanied by the droning of the vuvuzelas.

Next thing, they'll be playing them in church. The Orthodox Church doesn't normally use instruments in worship, but in Greek churches they have a sort of droning base called ison which sometimes sounds like a swarm of angry bees, and vuvuzelas make a very similar sound. The difference between a soccer stadium and church is that in church there is also a melody that goes above the ison.
Posted by Steve Hayes at 20:12

The ison! So that's what it's called. To me it sounds just amazing. As in http://zbor-sv-romana-sladkopevca-da-molcit-vsj-mp3-download.kohit.net/_/402882