The World Cup is more than halfway over, and more than half the teams have gone home. The USA, England, the top teams from the 2006 World Cup -- France and Italy -- and many more. Ghana is the only African team left in the running, and many South Africans are supporting them.

But what will the returning teams and fans take with them when they go home? And what lasting effect will it have on South Africa?

Here's a rather nice article by an American Shari Cohen: South Africa Rolls Out the Ubuntu in Abundance:

So, if South Africa accomplishes nothing more on the playing field, it will still have won as a host country. I am a cynic, no doubt about that. And yet I have to admit, I'm a little teary just writing this because I leave for home next weekend and I will be leaving a little piece of myself here in South Africa. I just hope I have learned enough to bring back a little piece of Ubuntu to my homeland, where perhaps with a little caring and a little water, it will take root as naturally as it does here, in the cradle of civilization. It's funny, many people in America still ask me, 'are the people in Africa very primitive?' Yes, I know, amazing someone could ask that but they do. And when they do, I usually explain that living in a mud hut does not make one primitive, however, allowing kids to sell drugs to other kids and engage in drive-by killings -- isn't that primitive behavior? I think it is. When I think of Ubuntu and my recent experiences here, I think America has much to learn from Africa in general, in terms of living as a larger village; and as human beings who are all interconnected with each other, each of us having an affect on our brothers and sisters.

And remember, just two years ago there was xenophobic violence in many cities in South Africa, where people attacked foreigners. So perhaps the World Cup, and the welcome it encouraged us to give to foreign visitors, might make us a little more welcoming, and we can hope that the ubuntu won't disappear after the final.

And this will probably also be remembered as the World Cup of the vuvuzela.

But an e-mail has been going around pointing out that it is not so new. The vuvuzela has been annoying people since 1660! 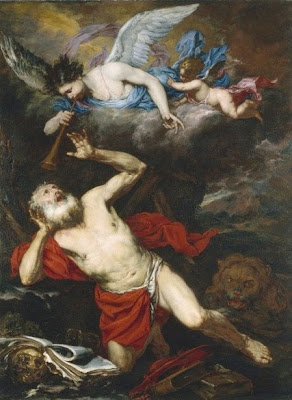 I needed a laugh Steve. THe painting made me laugh at the thought that the vuvuzela was a 17th century invention

We had the pot noodle horns and whistles when we were demonstrating. A lot less annoying when not broadcast on the TV.