Death of an old friend

This morning, in an amazing coincidence, I mentioned an old friend in a blog post on another topic, on my other blog, and as I was writing the sentence that mentioned him my cell phone beeped with a message from him, letting me know that his wife had died. He was Hiskia Uanivi, whom I had known as a student at the Paulinum, the Lutheran theological seminary in Namibia, and this is what I had written Tales from Dystopia III: Theological education in a totalitarian state: Khanya:

Two of the students, in particular, became friends of ours. One was Zephania Kameeta, who later become bishop of the Lutheran Church, and a cabinet minister after Namibia became independent; the other was Hiskia Uanivi, who later fell out with Swapo and lived in Angola under the protection of the Angolan government, returning after independence.

Hiskia came with me and another friend on a tour of South Africa at the beginning of 1971, and was amazed to see that in South Africa the grass was so green yet the cattle were so thin. Hiskia was engaged to another student, Albertina Eises, and they were married on 30 October 1971.

I was deported from Namibia three months later, and so did not see them much in their married life. Hiskia completed his studies and became a pastor in the Lutheran Church, and later left Namibia, and worked for Swapo in exile. He fell out with the Swapo leadership, however, believing that they were collaborating with the South African government. He lived in Angola under the protection of the Angolan government, and returned just before Namibia became independent, as leader of a workers revolutionary party.

A couple of years ago Hiskia and his family were in Pretoria, and came to visit us. and we saw each other for the first time in more than 30 years. Their children and ours had grown up. It was good to see them again, and I was sorry our meeting could not have been longer. I'm sure Hiskia must have fascinating stories to tell about his adventures. And it would be interesting to to have heard what Albertina did in this time, but now I'll never hear it from her. 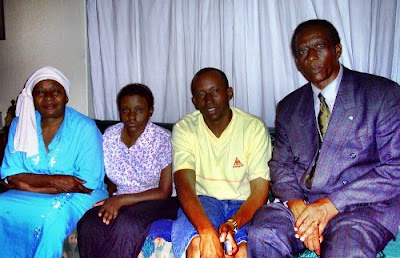 The picture shows Albertina, Dangi, Uetu and Hiskia Uanivi, when they visited us on 4 March 2007.

And today came the news that his beloved Albertina had died. May her memory be eternal!
Posted by Steve Hayes at 18:59

My sympathies for those who have lost someone precious to them. May they find comfort in this time of grieving.

It always feels quite strange when those sort of co-incidents happen like that.

I am sorry for the loss of your friend

Sorry for your friend's loss, and yours.

Also, this post brings home the personal reality of the political struggle against apartheid and oppression.