Clergy should not have to wear robes during services because such rules are 'absurd in the 21st century', according to a leading theologian.

Garments such as the cassock and surplice are a form of 'power dressing' which reinforce class divisions and prevent the wearer getting the Lord's message across, said the Rev Andrew Atherstone.

In a report titled Clergy Robes and Mission Priorities he called on the Church of England to allow ministers and parishioners to decide what dress code was appropriate. 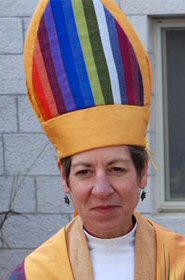 Hat (aye, well, mmm) tip to Father David MacGregor of Port Elizabeth, who adds, in his own blog Contact Online Weblog: "And when, O when, will we see the last of those absurd hats ?"

Anglican Priest Father David Heron comments: "It is well known that evangelical clergy don't like wearing clerical robes because they don't believe in the priesthood, and they like to pretend they're laymen. Now a raving Protestant says they should be abolished altogether! Crazy"

And I think, crikey, the 21st century? Have we reached it already? What a surprise!

And my mind goes back 40 years to a previous generation who said much the same thing as the Rev. Andrew Atherstone. The only difference was that it was the 20th and not the 21st century, and they weren't British Evangelicals, but Dutch Roman Catholics. 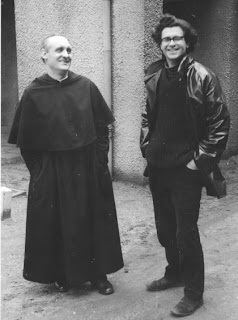 When I was studying in the UK in 1966-67 I spent the Christmas vac with some Dutch Augustinians in Breda and Nijmegen. And one of the ways in which I thought they were quite kinky was that they held views like those of the Rev (isn't Rev a bit 19th century?) Andrew Atherstone -- that their religious habits were a bit passe in the 20th century, and so they got all up to date by wearing business suits.

A friend of mine from England came and joined me for a week, and remarked that as the Dutch religious were abandoning habits for business suits, just the previous week he's seen a DJ on a British TV show wearing a monastic habit. These Dutch monastics were so desperately trying to be with it that they were quite without it.

We persuaded one of the Dutch Augustinians to put on his habit specially for a photo.

The previous summer the British satirical magazine Private Eye was advertising T-shirts with "Jesus saves" and "God is Love" printed on them, and John Lennon appeared on the front page of the Daily Mirror wearing one. I ordered a few, and persuaded the Dutch Augustinians to wear them with their business suits.

Oh yes, and the "Karl Marx" one I was wearing also came from Private Eye

But as for John Lennon and the Beatles, by the time I was staying with the Dutch Augustinians, they looked like this: 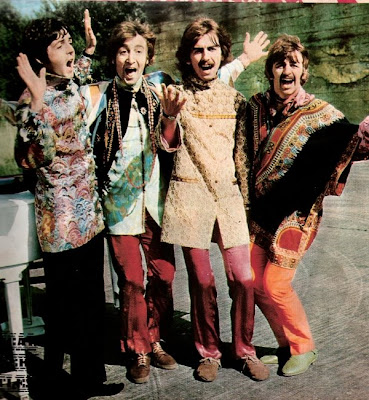 As we used to say back then: Dress happy.

As for me, I'm just glad that Orthodox clergy are not required to wear that most ludicrous of articles of attire, the dog-collar.
Posted by Steve Hayes at 12:10

In the Anglophonic world, it is not uncommon for Orthodox clergy to wear clerical collars (of various sorts). Here in America, Ss. Tikhon and Raphael were known to wear (and were photographed in) such collars along with suits.

It's the official policy of the Archdiocese in which I serve that clergy are to wear clerical collars outside the church building. (Not everyone does it, though.)

It's funny you should post this. Just last night I was hunting down some homily notes and came across a Greek church's site. In one of the priest's posts he receives a comment in which the person (another priest I presume) says:

...It (the post) reflects one of the reasons I like wearing a collar: Once people get to the point of saying, “You seem normal,” I think (or hope) that they can begin to see the Church as normal, and a real option even in our modern world.

A South African priest was recently told by a Greek priest that he ought not to wear a rather nice pectoral cross that he had. I'm not sure whether he said that because it was a Russian-style cross, or because it had been given to him by an Old Calendrist bishop.

But he says that if he does not wear it, and goes out wearing his exo-riassa, people are forever greeting him by saying "salaam aleikum".

Many Muslims are not ashamed of wearing Muslim garb, but I wonder about Orthodox clergy going around disguised as Roman Catholics and Protestants.

Thanks for the link. This IS an interesting old question. It occurred to me as I read this that maybe the priests and ministers wore identifying clothes so that the rock throwers would not aim at them. Which likely backfired on occasion.

The reason for the link was the different things that the 60s could be remembered for, and your post on Presbyterian Gal: THE FAITH TONES made me think of the Beatles, and that both the Beatles and beehive hairdos belonged to the sixties.

Concerning the robes worn by clergy, I think historically it was simply retaining clothes that had gone out of fashion elsewhere -- captured in the film about Francis of Assissi "brother Sun, Sister Moon", that shows the Franciscans wearing a much cheaper and simpler form of the everyday dress of the time, which they retained as a kind of uniform.

But when I put on my robe to serve as a deacon I pray "My soul shall rejoice in the Lord, for he has clothed me with the garment of salvation. He has covered me with the robe of gladness; as a bridegroom he has set a crown on me; and as a bride adorns herself with jewels, so has He adorned me."

In other words, as we used to say in the sixties, "Dress happy".

PS: Your MyBlogLog link didn't show up when you visited my blog - perhaps your login has expired.