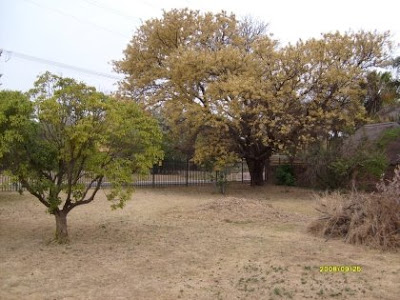 There's a big thorn tree in the corner of our garden, and towards the end of September it was in flower, covered with small yellow flowers.

A couple of nights ago the car was covered with the flowers when I went out to fetch my son from work, and out in the street there were gread drifts of flowers, though far from any of the trees, of which there are several in the neighbourhood. There had been a bit of wind, so perhaps that scattered the flowers.

We had been living in our house for twelve years before I actually noticed the tree flowering. I wonder if it flowers more in some years than others. It was certainly noticeable this year.

I'm not quite sure what kind of tree it is -- some species of acacia, but which, I don't know.
Posted by Steve Hayes at 18:54

My name is Renata