This is the 500th post in this blog, and deals with the magnificent seven -- deadly sins, that is.

The media have made much of a so-called "new list of seven deadly sins" supposedly issued by the Vatican.

Thanks to the Wonderful Jessica Hagy, (h/t Maggi Dawn), everything you always wanted to know about those deadly sins that have been in the news recently.

The diagram also demonstrates the distinction between “sins” as things inside which drive us to do wrong things and the symptoms, which surely aren’t, any of them, “sins”. 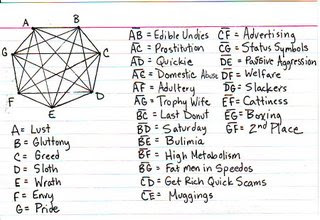 Most of the media reports of these "new seven deadly sins" have been rather facetious and flippant. One has to go halfway down the page of some of the reports to discover that

No official list of new sins has been issued by the Vatican, though the Bloomberg wire service reduced Girotti's interview to a catalogue of 'Seven Social Sins': birth control, stem cell research, drug abuse, polluting, helping widen the gap between rich and poor, excessive wealth and creating poverty.

In fact, these are all issues the church has struggled with for years while trying to apply ancient teachings to modern ethical dilemmas.

(TheStar.com | Religion | Thou shalt not pollute or clone).

There's a web site devoted to the premiss that "The press... just doesn't get religion", and they have published an analysis of some of the reporting on The Seven Sensationalist Sins. As in the case of the Archbishop of Canterbury's remarks on Sharia, the standard of reporting has been abysmal, and it's interesting that the chief culprits appear to be The Times and the BBC, which have in the past been held up as models of good reporting. How have the mighty fallen!

After reading some of these reports, I think that the problem is not that the press "doesn't ... get religion". I think rather that the media, the Western media in particular, are actually out to get religion.

This story gets a little bit too close to home. Western values promote a culture of entitlement -- "You deserve it!" say so many ads. After all you worked hard for it, or perhaps you didn't, but you deserve it anyway. Who cares if your luxury creates poverty for others? Creating poverty is cool, as long as it makes you rich, therefore those who, like the church, say it isn't cool must be mocked and ridiculed.

But now it is Great Lent, and it's not really time to dwell on the sins of the media. If we didn't ourselves believe so many of their lies, they wouldn't be able to peddle them so easily.

The so-called Seven Deadly Sins are actually not so much sins, nor, as Bishop Alan suggested, are they symptoms. Rather they are passions, and the sins are the behaviours that spring from them, including contributing to pollution and poverty. Even if the media regard it as ridiculous that we should examine our behaviour and see how much of it is driven by the passions, we should do so anyway.

Orthodox Christians pray the prayer of St Ephraim a lot during Lent:

O Lord and Master of my life
take from me the spirit of sloth, despair, lust of power and idle talk.

But give rather the spirit of chastity, humility, patience and love to Thy servant.

Yea, O Lord and King! Grant me to see my own transgressions, and not to judge my brother, for blessed art Thou, untio ages of ages. Amen.
Posted by Steve Hayes at 07:40

"The press just doesn't get religion..."

Do you really think that creating personal wealth for yourself also creates poverty somewhere else? As if all the world's wealth were a zero sum equation? I know some people do, but I wasn't sure how to interpret your post.

Perhaps my post was difficult to interpret because the intention changed about 3 yimes while i was writing it.

My first intention was to post the diagram, which I found on Bishop Alan's blog, because I thought it helped to clarify the distinction between sins and passions.

The thing from the Vatican did something similar, listing some specific sinful behaviours that arise from the same passions.

Thwn I was rather sidetracked by the gross misreporting of the Vatican thing in the media, which seemed like a deliberate attempt to trivialise it.

Also, in our parish, after the Presanctified Liturgy on Wednesday, while we had a meal we listened to a podcast of some Orthodox people in American talking about the Prayer of St Ephraim, and the leaning of "lust of power", and one of them mentioned the "culture of entitlement" that is so common in our society and pushed by the media, especially advertising. Greed, in particular, is touted as a virtue, especially in advertising.

Finally, yes, I do believe that the rich/poor divide is very often a zero-sum game (something assumed by the Vatican list), especially in a planet with finite resources. Someone once calculated that if every adult male Indian used toilet paper the world's paper supply would be exhausted in two weeks.

Thanks for the clarification. I found the tidbit about Indian toilet paper use fascinating. Thank God they also don't use disposable diapers! I seldom think about my purchasing decisions on a global economy of scale, other than to try to emphasize buying local in as much as possible. But if I buy beef from a local cattle rancher, I don't think that I'm taking beef away from a starving child half-way around the world. The beef (and the grasslands that produce it) is here, practically in my own backyard. On the other hand, I can see how over-consumption of imported oil-based energy (and all the things we Americans use it to produce) DOES deprive someone else in the world of that energy. So, for me it's a both/and sort of thing. The more I think about things like that, the less and less my conscience allows me to be an American.

Steve - there is a lot in what you say. Another calculation that has been made is that if everybody in the world used resources like the US, we would need the equivalent of 6 earths JUST TO REACH SUSTAINABILITY!. But on the other hand, concerning douloijohanna's remark about oil: What most Americans don't realise is that most of their oil comes from Canada, as well as a lot of their electricity (esp the Northeast). Canada could theoretically bring the US to their knees in less than 2 weeks, if we ever so desired (evil cackle follows.....)

I just read this titbit on another blog:

Americans as a nation use over 26 billion rolls of toilet paper a year.

Northern Tissue (now Quilted Northern)'s original slogan was that their toilet paper was "splinter free", because they had perfected the process of dissolving wood fibers.

Hat-tip to Lucy in the sky