Horror as a genre

Horror has long been assumed to be a literary genre. We all know what horror is -- or do we? A couple of years ago I reviewed a book on horror as a genre (see here Horror as a literary genre (review) | Khanya), and the author failed to come up with a satisfactory definition.

My introduction to horror literature came at the age of 9, when I read a book called Uncle Arthur's Bedtime Stories, which belonged to my cousin. I found most of the stories absolutely horrific. See here Children’s literature: fantasy or moral realism?

Later I developed a taste for horror | Khanya after reading an anthology of short stories called Detection, Mystery, Horror edited by Dorothy Sayers. 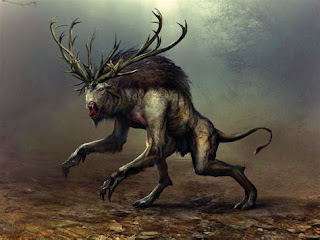 Then I read my first full-length "horror" novel, Dracula. I read various books described as "horror", many of them compilations of short stories, some good, some dreck. I also read a few longer novels classified as "horror"; one of the best of them was Stephen King's zombie story, Pet Sematary. But what was the horror genre? I wasn't sure.

I read a few books about the horror genre -- see here for my reviews of some of them Horror as a literary genre (review) | Khanya, which gave no satisfactory definition of horror at all, and Danse Macabre: monsters in literature and life | Khanya by Stephen King, where he did define monsters, but do they define "horror" as a genre? Lots of books have monsters of various kinds, but we don't classify them all as "horror" -- The Hobbit, for example.

Then comes a page on GoodReads celebrating the horror genre. But are all the books listed there really "horror"? 50 Most Popular Horror Novels on Goodreads - Goodreads News & Interviews:

For Horror Week, Goodreads set out to reveal the most popular horror stories. To create our list, we focused on the books that have been added the most to Goodreads members' shelves.

From literal monsters to purely psychological terrors, these are tales of madness and pandemonium, retribution and absolution. Long heralded as the "Master of Horror," Stephen King reigns supreme, with five books on our list, but his son Joe Hill is not far behind, nabbing four spots. And along with classics from Mary Shelley and Edgar Allan Poe, Robert Kirkman's end-of-the-world comic, The Walking Dead, made the cut as well as an award-winning children's ghost story, The Graveyard Book, from Neil Gaiman.

I've come to the conclusion that horror, as a genre, is confined to short stories, and even there it is often combined with other genres. In longer works, like full-length novels, horror is an element, but does not a genre make. In The Lord of the Rings there are horror elements, at the gates of Moria, when Frodo encounters Shelob and so on. But these do not make it a book in a horror genre.

Among short stories, Stephen King's "The Jaunt" or "The Mist" are horror, but they can also be classed as science fiction. The stories in the Horror section of Dorothy Sayers's anthology were definitely horror, but in most of the longer works that end up being classified as horror the actual horrific episodes are usually no longer within the larger works than a standalone horror short story.

A good source for getting at "horror" is the 18th-century conservative philosopher Edmund Burke's treatise on the Sublime and the Beautiful. The beautiful pleases us by harmoniousness, good order (cf. the relationship between "cosmos" and "cosmetic"), etc. The sublime fascinates us with darkness, hugeness, great height or, even more, great depth, suddenness, the thought of pain, etc.

I think that what primarily attracts many readers to certain works is, in fact, the attraction of the sublime, even if all the chatter is about other things. From its title on, Conrad's "Heart of Darkness" is about the sublime -- though we chatter about colonialism, feminism, whatever, i.e. politics.

Reading works that partake of sublime may give us suspense and excitement -- along with assurance that we are, in fact, quite safe. The popularity of literary horror has much to do with the boredom of the lives of many of its consumers. That boredom derives partly from the ease and the standardization of modern life but also from the absence in it of spiritual significance. Conversely, as T. S. Eliot says in his Baudelaire essay, "the possibility of damnation is so immense a relief in a world of electoral reform, plebiscites, sex reform and dress reform, that damnation itself is an immediate form of salvation --of salvation from the ennui of modern life, because it at last gives some significance to living" (Selected Literary Essays, pp. 378-379). Lacking belief in the soul, the contemporary horror author may rely mostly on the description of extreme damage to and violation of the body, of the contradiction of the walking dead, etc.