Why Trump lost Christian voters in 2020

It appears that US President Donald Trump lost a significant amount of support among Christian voters in the 2020 US presidential election. In other aspects of the election, such as that for the Senate and House of Representatives, there was not such a significant loss of support. See here Trump%20lost%20religious%20voters%20%u2014%20and%20it%20cost%20him%20in%20multiple%20states%3A%20analysis%20-%20Alternet.org:

President Donald Trump's overwhelming support from evangelical Christians slipped during the 2020 election as President-elect Joe Biden managed to sway a substantial margin of those voters. Now, Trump's campaign team is searching for someone to blame for its election defeat, according to Politico.

Initially, Trump's campaign advisors and Christian allies dismissed the poll projections that suggested a decline in his support among religious voters, insisting the president delivered for his religious supporters throughout his term.

Political analysts have been seeking the reasons for such loss of support, but for Christians the reasons are simple and not far to seek.

Jesus said, "By their fruits you shall know them." In their appearances on TV, which of the two, Donald Trump or Joe Biden, showed more of the fruit of the Spirit, which St Paul lists in Galatians 5:22?

And which of them, Joe Biden or Donald Trump, showed more of the works of the flesh, which St Paul lists in Galatians 5:19ff?

It has been reported that some of President Trump's supporters ascribed his loss of the election to demonic influence, and they are probably right, because one of the things that demons do is tempt people to behave in ways that display the works of the flesh rather than the fruit of the Spirit. 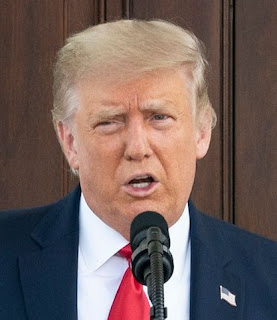 The way that they do this has been documented in C.S. Lewis's book The Screwtape Letters, which politicians who wish to gain the support of Christian voters could profit from reading.

None of this says anything about the policies of the parties that these two men represent. That is often a factor in the political choices that Christians make, and much of it has to do with exercising one's judgement to balance the good and the bad in the various policies.

Some may have voted for Biden because they thought his policies on healthcare were more Christian than those of Trump, while others may have voted for Trump because they thought his policies on abortion were more Christian. But that is a matter of judgement and weighing up the probabilities, and in the end it probably balanced itself out.