One of the things that I find vaguely annoying is the kind of nonsense one often hears spoken about Tarot cards. On the one hand you hear some Christians saying that Tarot cards are of the devil, and on the other you hear occultists talking about their deep hidden meaning that only those really in the know can discern (and when those in the know do reveal, in conspiratorial whispers, what they have discerned, it usually turns out to be quite trivial).

So I was quite pleased to discover (hat-tip to A Conservative Blog for Peace) this article 7 'Ancient' Forms of Mysticism That Are Recent Inventions | Cracked.com:

Tarot's new fortunetelling function was quickly seized upon by 19th-century fans of occultism, which was what bored white people used to do in the 19th century before backpacking around India was invented. The occultists 'discovered' tarot's long history and renamed the two parts of the deck 'Arcana' to replace the slightly less spooky trumps and pits.

In 1909, two occultists published a new version of the cards, the Rider-Waite deck, which is what most Americans visualize today when they hear the word "tarot." The new deck switched out the traditional Christian imagery on the cards with pagan symbols to make it look like they predated the New Testament, replacing the Pope and Popess with a Hierophant and High Priestess, presumably so that fortunetellers could say more exotic things than "I see a Pope in your future."

I first heard of Tarot cards in Iris Murdoch's novel The sandcastle in which a schoolgirl used the cards to interpret things that were going on in her life. The descriptions meant nothing to me, so I went out and bought a pack of Tarot cards. The only place in Johannesburg that sold them, I discovered, in the Johannesburg of 1962, was "The Mystic Bookshop", which was on the second floor of a rather seedy looking building in Eloff Street (which probably looks a lot seedier today). The shop was full of spooky paraphernalia, like crystal balls, candlesticks in the shape of snakes and other such things. They had only two packs of Tarot cards in stock, retrieved from a dusty shelf in a rarely-opened cupboard, so I gathered that there wasn't a big demand for them.

I took the cards home, and looking at them disovered what references to The Hanged Man and the Falling Tower in the book actually meant. I was also struck by the Christian imagery of the cards, especially in the greater trumps. The people were all dressed in medieval clothes, and one felt transported back into an age of faith, in which Christian imagery and symbolism came naturally to people and were a part of everyday life.

In The sandcastle the girl, Rain, assigns the cards her own meanings, and relates them to the people and events in her life. I became quite curious about them, and mentioned this to Brother Roger, an Anglican monk of the Community of the Resurrection, who had lent me the Iris Murdoch book. His response was to lend me another book, The Greater Trumps by Charles Williams. 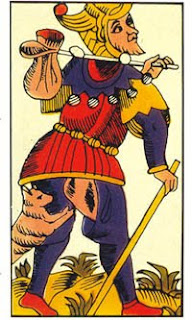 Central to the Williams book is the role and character of The Fool, shown on the left. Williams's dealing with the Tarot in his novel is quite different from that of Iris Murdoch, though there is one common feature. Like Rain
Posted by Steve Hayes at 10:15

Well, we all know that cardboard is not very bright, so I've almost exhausted myself telling people who I read Tarot for (two or three folks) that they should learn to read the cards for themselves.
Because it's more like a two-person mystical experience, reading cards for another- with the cardboard as interface.

I think the Rider-Waite Tarot retains more of the Christian symbolism than some other modern decks, which have gone even more Pagan-y.

According to Robertson Davies (one of my most favourite authors), the fact that the dog has bitten a hole in the Fool's breeches is really important, because the Fool's behind symbolises the need to get in touch with the unconscious.

I love Tarot cards, but I don't use them for divination because to me, they are pictures and not windows.

I suppose you could create a deck based on Orthodox icons... that would probably offend too many people though.

I'd like to see a deck consisting of really good woodcuts.

I am rather fond of the Aleister Crowley deck, actually, which was painted by Frieda Harris.

T S Eliot's poem The wasteland has a Tarot deck in it with invented cards - rather intriguing.