When Hugo Chávez first became president of Venezuela in 1999, he seemed to be a champion of democracy, and in initial reforms he tried to introduce a more participatory style of democracy.

But that didn't last, and when he publicly sided with political leaders whose main aim was to suppress anything resembling participatory democracy, like Robert Mugabe of Zimbabwe and Muammar Gaddafi of Libya, he showed his true colours. Those who praised him for his initial championing of democracy have now become his fiercest critics, as he has clearly joined the side of the suppressors of democracy.

Hugo Chávez has long considered Noam Chomsky one of his best friends in the west. He has basked in the renowned scholar's praise for Venezuela's socialist revolution and echoed his denunciations of US imperialism...

The president may be about to have second thoughts about that, because his favourite intellectual has now turned his guns on Chávez.

Speaking to the Observer last week, Chomsky has accused the socialist leader of amassing too much power and of making an "assault" on Venezuela's democracy.

Perhaps this is yet another illustration of what was said by the Brazilian educationist Paolo Freire,

The oppressed, having internalized the image of the oppressor and adopted his guidelines, are fearful of freedom. Freedom would require them to eject this image and replace it with autonomy and responsibility. Freedom is acquired by conquest, not by gift. It must be pursued constantly and responsibly. Freedom is not an ideal located outside of man, nor is it an idea which becomes myth. It is rather the indispensable condition for the quest for human completion (P. Freire, Pedagogy of the oppressed, 1998, p. 29). 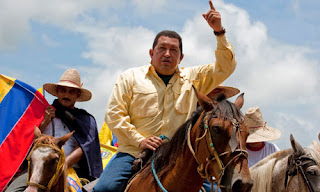 Unless the oppressed can get beyond this barrier, then even if they succeed in overthroring their oppressors, they will simply become oppressors in their turn, and hence phony liberators.

And George Orwell said much the same thing in his Animal farm.

There are some pictures of Hugo Chávez in which he seems to bear an uncanny resemblance to the late Eugene Terreblanche. Or Julius Malema.
Posted by Steve Hayes at 09:13

I've found Chavez's choice of friends repelling. Doesn't matter what sort of scum they are just so long as they hate the US

I agree with the previous commenter completely. Just the fact of Chavez's chumminess with the Castro dictatorship in Cuba is a sign of what he is really about. I've been to Cuba and, in my opinion, anybody who supports this cannibalistic regime in any way is a villain.

I have several students from Venezuela and they all have an extremely low opinion of Chavez, too.

There was a funny photo caption in the Mirror today, of Blatter and Mugabe. It said, "Ruthless dictator meets Mugabe."

James, the "Ruthless dictator meets Mugabe" one reminded me of this:

There are two novels that can change a bookish fourteen-year old's life: The Lord of the Rings and Atlas Shrugged. One is a childish fantasy that often engenders a lifelong obsession with its unbelievable heroes, leading to an emotionally stunted, socially crippled adulthood, unable to deal with the real world. The other, of course, involves orcs.