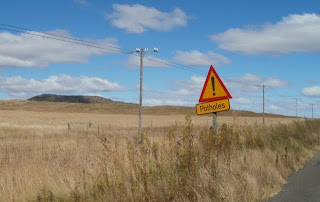 One of the things we have noticed in our holiday travels is the deterioration of the transport infrastructure in the country.

In some provinces, notably the Free State and Mpumalanga, the roads are in poor condition, and the Free State roads were particularly bad, full of potholes. The 700 km drive from Clarens to Graaff Reinet was very tiring, because of the concentration needed to drive along the potholed roads, and that was in daylight and in good weather. At night, or if it was raining, it would have been far, far worse. When we reached the Eastern Cape the roads were a lot better, and likewise in the Western Cape. The Free State roads, however, were beginning to resemble those of Albania 10 years ago, where repairs could never catch up, because as soon as one section was repaired, and the road workers moved on to a new section, the newly repaired section began to deteriorate again.

But it wasn't only the roads; the railways are also deteriorating. Around Villiers in the Free State we saw abandoned railway lines, covered with weeds. There was another abandoned line between Steynsburg and Rosmead in the Eastern Cape, and yet another going north from Graaff Reinet. 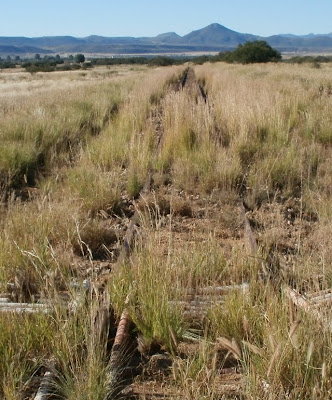 The reason for both kinds of deterioration seems to be the deregulation of road transport, which took place about 25-30 years ago, during the privatisation mania of the Reagan-Thatcher years. This led to a huge increase in the number of heavy goods vehicles on the roads, and in many cases the roads were not designed to carry such traffic. Goods that used to be carried by rail now go by road, with a consequent deterioration of both the road and rail infrastructure.

My cousin-in-law in Graaff Reinet, Nick Grobler, told us of a woman he knew who had uterine cancer, and had to go to Port Elizabeth for a hystrerectomy. In the past it was a comfortable overnight train journey, but now, being discharged from hospital within three days, she had to return to Graaff Reinet in a cramped minibus taxi, and though the roads in the Eastern Cape are not (yet) as bad as those in the Free State, it was not a pleasant journey after major surgery.
Posted by Steve Hayes at 17:36

You have deteriorating transport infrastructure too? Our rails are rusting here. How about yours?