Saturday was supposed to be the end of the world, or at least judgement day. It didn't happen, and very few expected it to. Harold Camping, whose idea it was, turned out to be a better as a publicist than he was as a prophet.

Today is the end of MyBlogLog. If only it were to turn out to be a similar non-event, but I suspect it won't.

But to make up for those disappointments, here are some pictures, provenance unknown, which my wife sent me by e-mail from work, allegedly taken from a boat in the middle of the south Pacific. 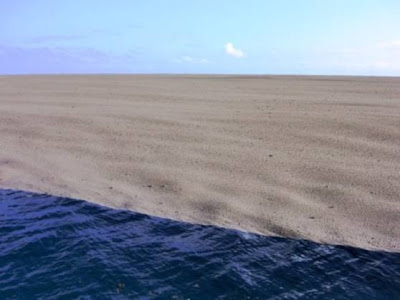 Though this may look like a beach, it isn't. It is particles of volcanic rock floating on the sea. One used to be able to buy pumice stones that floated in the bath, and this is evidently the same sort of stuff. 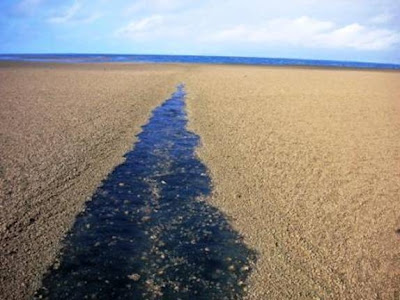 And that is the wake of the boat passing through it.

But if that was volcanic rock, where was the volcano?

The crew of the boat looked around, and saw it erupting under the sea, some distance away, and as they watched a new island was formed. 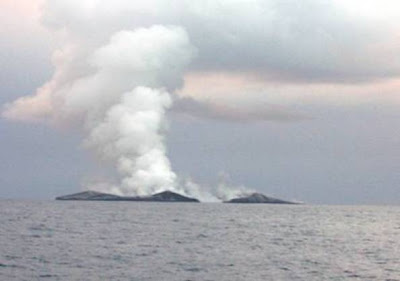 So instead of ending, the earth is renewing itself.

But can we say, "MyBlogLog is dead, long live MyBlogLog?

There were some MyBlogLog bloggers who visited my blog regularly, and I've now put them into my regular blogroll so I can find them again. There were others whose blogs I sometimes visited, but who never (according to MyBlogLog) paid a return visit, so I'll lose touch with them, and not be able to find them again.

But like volcanoes in the Pacific, new blogs will doubtless continue to appear from time to time.
Posted by Steve Hayes at 04:02

Wow the photos are amazing!

Nice pictures! Actually, Steve, for many MyBlogLog diehards this IS the end of the world. It also underscores why you should NEVER get too attached to or involved with one particular product or service online!

I deleted mine some weeks ago. Pity but that's Yahoo for you.

Wow! those are amazing photos :-)

I deleted MyBlogLog yesterday and managed to delete my StatCounter code at the same time. The later I have restored to it's former glory. I like it's newly updated format :-)