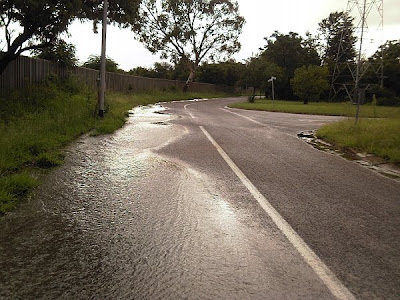 Last night it rained, and this morning, though the rain had stopped, there was water running down the street. It comes from the vacant land on the left, behind the concrete fence. The fence was erected a few months ago by the railways -- the vacant land belongs to them, and lies between the road and the railway line.

When it rains the land, across the road from us, becomes waterlogged, and after a while beginds to produce water like a squeezed sponge. In the past it used to come out next to the tree in the background, and the first time it happened I thought it was a broken water main, and called the municipality to ask them to mend it. But nothing was broken. Later I walked across the vacant land, and found that it was waterlogged, where otherwise it was quite dry.

It's not just run-off from the rain. This water came several hours after the rain had stopped, and sometimes it comes several days afterwards. Once it covered the whole width of the street, and at the gutters at the edge it was a strong-flowing stream. On that occasion it had noty rained for some time, so I went out and filled buckets to water the garden with.
Posted by Steve Hayes at 07:57

..so I went out and filled buckets to water the garden with.

So that's SA, eh? I always wondered what it looked like. I have this vision of vast open plains.