Death in the neigbourhood

When I was in Greece in 1998 and 2000 I noticed lots of roadside shrines marking places where had been killed in motor accidents, and they were beginning to make their appearance in Albania as well. They have also been becoming more common in South Africa, especially at busy intersections, dangerous bends and blind rises and so on.

But yesterday one appeared in our quiet suburban neighbourhood, and made me wonder who or what had died, and in what circumstances.

You see, we live in a quiet cul-de-sac with no through traffic. There's only one road in and out of the neighbourhood, and a couple of months ago the city council put in a mini-traffic circle and a few speed bumps to make doubly sure that people didn't drive around like maniacs.

And then yesterday we noticed this: 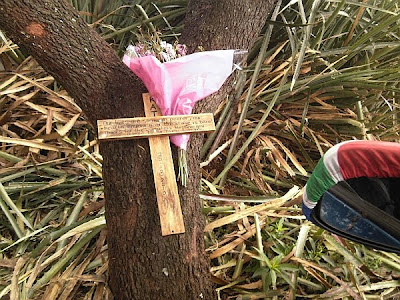 It's about 10 metres from one of the new speed bumps, so it couldn't have been a vehicle travelling at high speed that crashed into the tree, and anyway, the tree seemed to be unscathed, though the vegetation around it seemed pretty well trampled.

The name on the cross was "Kat", which could be a nickname for a person, or literally a cat. Was a pet cat run over here? Possibly. Cats do sometimes dash across the road unpredictably , and even a slow-moving vehicle might not be able to stop in time. But if that is what happened, why the trampled vegetation behind the tree?

The date on it was 25 December 2010, and we went out to church on Christmas eve and again on Christmas morning, and noticed nothing untoward, either going or returning.

So the mystery remains, and someone is sad and missing Kat, whoever or whatever Kat may have been.
Posted by Steve Hayes at 11:55

A bit creepy when it doesn't seem to be car accident, but even the size of the cross is small so it is most likely a pet

I first saw these in Mexico (and later in Chile) in the early '90s, and since then they've made their way northward into the US.

A Chilean friend wrote a paper on their diffusion in her country.

General prayer for all souls, methinks.