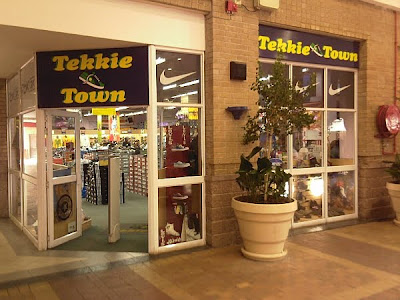 One of the perennial topics of discussion in the alt.usage.english newsgroup is the different versions of books published in the USA and in Britain, and the kinds of things that are changed by publishers on both sides of the Atlantic. One of the most frequently-discussed examples is the Harry Potter books, and someone recently gave this example:

I purchased one of the HP books in England and had to deal with the British terminology, much of which I knew, but I had to ask my daughter, who was living there at the time what "trainers" and "a jumper" are. (For those who don't know, they are "sneakers" and "a sweater", pull-over I think.)

When I went to the UK to study in 1966 I faced a somewhat different problem: what I knew as "tackies", "sand shoes" or "tennis shoes" were apparently called "plimsolls" in England. I visited a family I knew who had moved to England a few months before I went there, and their children, who had been to school in Pietermaritzburg, spoke of their consternation are being asked by a teacher at their English school to put their "plimsolls" on. They simply had no idea what he was talking about. And I wouldn't have either. I knew plimsolls as lines painted on the sides of ships to show how much they could be loaded, depending on the temperature and salinity of the water.

It seems that in the UK they now talk about "trainers", but trainers are posher than "plimsolls". In South Africa, however, "tackies" covers the whole range, from basic to posh, and here is a shop in a local mall that sells the whole range, which rejoices in the name "Tekkie Town" -- the spelling is phonetic, since "tekkie" is the way most South Africans pronounce "tackie", but also the non-standard spelling can probably be registered as a trade name. 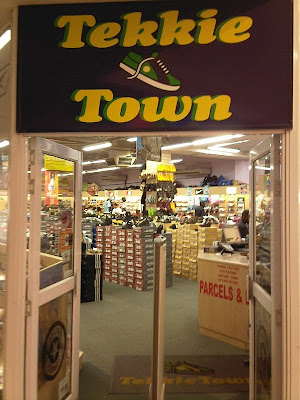 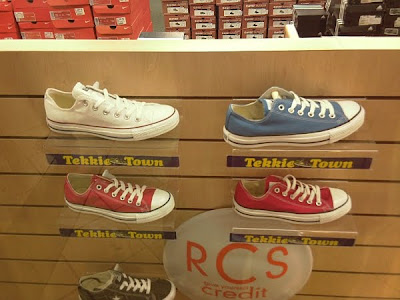 to the much more fancy (and expensive) versions seen here 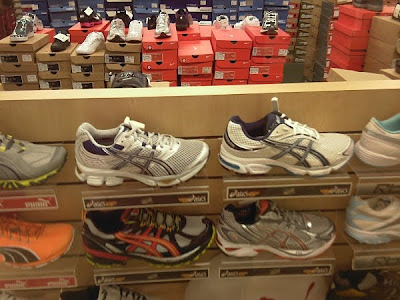 the more expensive ones seem to have their brand labels on the outside, as if to proclaim to the world, "Look what I can afford." But in South Africa they are all called "tackies", as are wide-tread car tyres, which are popularly known as "fat tackies".

I wonder if there will be a South African version of the Harry Potter books that, instead of "trainers" and a "jumper", have "tackies" and a "jersey".
Posted by Steve Hayes at 11:50

May I interject as an Ameri-Brit (or is it Brit-American).

Jumpers are pullovers in Britain. You didn't ask, but just to get confusing, in America Jumpers are pinafores. Resulting in lots of confusion when Americans here one British male tell another that he likes his Jumper.

By the way, when I went on a business trip to Johannesburg in about 1998, I had a very hard time containing my amusement when my South African colleagues referred to their, now defunct, computer disks as "stiffies".

Pam, the pronunciation would be identical to the word "Tacky".

Non-standard spelling of "tackie" as "tekkie" doesn't change the fact that "tekkie" is merely descriptive of the product. Unless it can be shown that "tekkie" has acquired secondary meaning through "extensive, continuous, and exclusive use," i.e., that "tekkie" is singularly associated with that particular store and no other, it is highly unlikely the term can be trademarked.

For trademark purposes, a term which lacks secondary meaning should at the very least require "imagination, thought and perception to reach a conclusion as to the nature of the goods."

Please excuse the pedantry. As it is extremely rare for me to actually remember anything from my legal education, I felt compelled to post.

In our home in Uganda in the 50's, a good wallop with a tackie was the most common threat for a misdemeanour.
When we moved to Australia in '63, we had a whole vocabulary of swahili (cho, dhobi, barafu, etc.) which could no longer be used, and we had to cope with a new set of words - flip-flops were thongs, tackies were sandshoes, crisps were chips, sweets were lollies, and puddings were sweets and your friend was a mate. The accent was baffling too.