Politics is getting interesting again, thanks to two fascist clowns 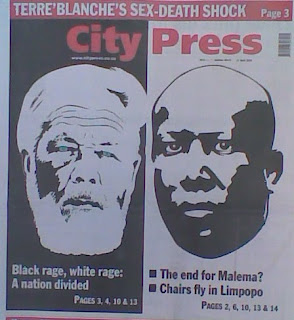 Easter week of 2010 will be remembered as the week when politics in South Africa became interesting again, thanks to two political clowns and the media.

On the left, Eugene Terre'blanche (known as ET), former leader of the AWB (Afrikanner Resistance Movement), and on the right, Julius Malema, leader of the ANC Youth League.

ET made headlines by the manner of his death, and the rumours that circulated around it, and his political buffoonery lay in the past, though his funeral was a circus, if media accounts are to be believed, and some of his supporters appear to believe that Julius Malema's racist rhetoric at least contributed to his death, if it was not directly responsible for it.

But, as the front page of City Press shows, they were actually birds of a feather, both dedicated to overblown fascist and racist rhetoric. But a nation divided? I doubt it. Both these demagogues appealed to small but vocal minorities, and they have been boosted by much media attention.

For ten years or more, politics has been excessively boring. Endless stories of graft and corruption, and fat cats jockeying for position. In the apartheid days we were largely protected from such stories because the press was kept on a tight leash by the National Party regime. The best one could say about the corruption stories was that they showed we now have a free press.

But the antics of ET and Malema and their supporters provide entertainment, and the media are determined to give it to us. Not all of the jounalism is responsible, though. One can expect sensationalism from tabloids like The Sun, but even "responsible" papers like the Sunday Independent could not resist a sensation-mongerring headline like

Was ET gay and bonking darkies?

based on the rumour that a used condom had been found in the room where ET was murdered. The police had categorically denied that a condom had been found, but the Sunday Independent was not about to let the facts get in the way of a good story. They did include the police denial -- in small print, right at the bottom. So the antics of the media are almost as entertaining as those of the protagonists.

But it also reaches the point where it goes beyond a joke.

The last straw was when Julius Malema kicked a BBC journalist, Jason Fisher, out of a press conference, claiming he had been insulted.

Malema apparently castigated the Movement for Democratic Change, the Zimbabwean opposition group, for speaking from their air-conditioned offices in Sandton. And Fisher pointed out that Malema himself lived in Sandton, and Malema blew his top.

Any politician in a democratic society with a sense of proportion would probably have grinned, said "Touché!" or something similar, and moved on.

The fact that Malema perceived that as an insult and lost his cool over it and kicked the journalist out speaks volumes. It doesn't matter what Malema said. The words he used are not important. It his actions that show that he is a fascist, with no sense of democracy, and no sense of proportion.

As another journalist in City Press, Xolela Mangcu, put it, "Il Duce step aside: a fascist fire rages in Malema."

If Malema had any political nous at all he would see that as an insult, and an insult far worse than saying that he lived in Sandton.

As Mangcu says of this incident

Perhaps a little world history could be helpful in opening our eyes to what Malema's reaction could mean for our young democracy and people.

The historical figure I have in mind is Italy's fascist leader, Benito Mussolini. On the eve of Mussolini's reign as prime minister a critic asked him about his party's political programme. Mussolini mocked the critic thus: "The democrats of Il Mondo want to know our programme? It is to break the bones of the democrats of Il Mondo, and the sooner the better."

Mussolini concluded his tirade thus: "The fist is the synthesis of our theory."

And that statement is a pretty good summary of the political programme and philosophy of ZANU-PF in Zimbabwe, which Malema has just visited, and spoken admiringly of ZANU-PF.

This, is of course, an embarrassment to the leadership of the ANC, which is trying to portray itself as a neutral honest broker between ZANU-PF and the MDC, an image which Malema's blatant partisanship has shattered. His outburst to the BBC journalist has shown his true colours. It bodes ill for our democracy if his political career goes any further. Xolela Mangcu is hopeful that it won't

Could Malema be the face of the replacement of politics with violence? I doubt it. Malema will ultimately trip on his own words. Besides, South Africa is too complex and differentiated to fall under the rule of one Il Duce.

But if anyone is getting cold feet about coming to South Africa for the World Cup for fear of a bloodbath, don't worry about it. Julius Malema is unlikely to become president this year, or next year, or any time for the next nine years. And a lot can happen in nine years. South Africa has plenty of precedents of politicians who appeared to have a meteoric rise, and had a sputtering fall. Tielman Roos, for example. Anyone remember him? With any luck, Julius Malema will go the same way.
Posted by Steve Hayes at 13:27

I think the words used are extremely important. To my mind, The fact that Malema kicked the journalist out is not that disturbing.


The language used. "Jump" "behave" "That WHITE tendency"... the insults to what was in the journalist's trousers. The comment; "you are a small boy". While these are inflammatory, distasteful and purile, this is not the main issue.

The main issue is the fact these words betray a racist inner attitude in the speaker. It is the same language used by white supremists when dealing with black people. It minimizes humanity (small boy) individuality (white tendency) robs the recipient of choice (get out / jump) and degrades (rubbish in your trousers).

If we choose not to excuse it in the AWB we can not excuse it from Malema... this is part of what we call "racial equality"

Malema's emulation of this behaviour makes him no better than Eugene Terreblance.

Neither the likes of the AWB nor Malema are excusable. They both encourage a culture of disrespect which inhibits the forward movement of the reconciliation process.

Not sure if the murder of someone could be termed, by a Christian, "interesting", Steve.

It was the politics, rather than the murder, that I said was interesting.

However, murder does seem to be interesting; how else would you explain the fact that 99,9% of whodunits are concerned with murder rather than any other crimes? A whodunit without a corpse is rare indeed.

But in this this case the interest arises mainly from the political opinions and activities of the victim, and I suspect that more people than usual will be following reports of the trial, mainly to see if a political motive for the murder emerges.