The system that Lower Merion school officials used to track lost and stolen laptops wound up secretly capturing thousands of images, including photographs of students in their homes, Web sites they visited, and excerpts of their online chats, says a new motion filed in a suit against the district.

The complaint is about a picture of a pupil sleeping, but what else might they be watching? Voyeurs could watch pupils dressing and undressing, and more. 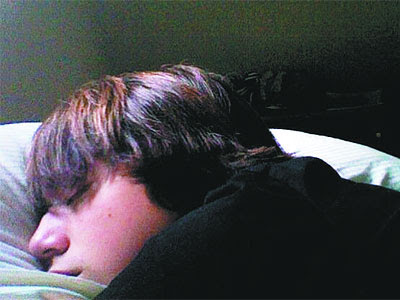 This photo, allegedly taken surreptitiously by the Lower Merion School District through a laptop web camera, shows Blake Robbins sleeping at home at 5 p.m. on Oct 26. (Photo provided by the Robbins family)
More than once, the motion asserts, the camera on Robbins' school-issued laptop took photos of Robbins as he slept in his bed. Each time, it fired the images off to network servers at the school district.

Back at district offices, the Robbins motion says, employees with access to the images marveled at the tracking software. It was like a window into "a little LMSD soap opera," a staffer is quoted as saying in an e-mail to Carol Cafiero, the administrator running the program.

"I know, I love it," she is quoted as having replied.

There's an almighty war going on between authorities and people and how did those authorities get to be authorities in the first place? And how could that woman say it was "lovely"?

That's creepy and disturbing on a few levels.