Who is Glenn Beck? 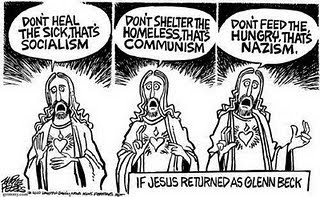 Jim Forest, in the Netherlands, writes On Pilgrimage: Thank you, Glenn Beck:

I live a sheltered life, that is to say I watch very little TV. Until yesterday I had never heard of Glenn Beck. But when a friend in Kentucky sent me an e-mail asking if I was aware that Dorothy Day had been mentioned on Glenn Beck’s weekly TV show, I got curious. Via YouTube, I quickly discovered that Glenn Beck is more than willing to accuse anyone he doesn’t agree with of being a socialist, a communist, a marxist or a nazi, or even all four.

Glenn Beck, an American radio and television host that I'd never heard of till this week, has set off a firestorm of web commentary after denouncing social justice as a 'perversion of the gospel'. Well, what do I say to that? I'm lost for words.

It seems that Glenn Beck has mentioned Dorothy Day as a Marxist and someone Marxists knew, but whom he had never heard of. I suspect, however, that more Christians have heard of Dorothy Day than have ever heard of Glenn Beck. Glenn Beck also mentioned a book about Dorothy Day, which happens to have been written by Jim Forest, and that was why someone tipped Jim Forest off about the existence of Glenn Beck, hence his blog post. So it seems a suitable opportunity to mention the book and put it on my "to read" list:

Love Is the Measure: A Biography of Dorothy Day by Jim Forest

Jim Forest is an Orthodox Christian, and bosser-up of the Orthodox Peace Fellowship. Dorothy Day was an American Roman Catholic who cared for the poor and homeless, and along with Peter Maurin and Amon Hennessy founded the Catholic Worker movement and developed the philosophy of Communitarianism, which is similar to that expounded in the UK by G.K. Chesterton and Hillaire Belloc. So I'm sure Jim Forest's biography of her is well worth reading.
Posted by Steve Hayes at 06:44

Most troubling is the dangerous, popular vein of Orthodoxy in the States that is in support of Beck. If you've not seen, God help them!

Consider yourself lucky that you haven't been made a little dumber by listening to Glenn Beck. The stupification (um, that's not a word) of the nation via "Faux" News seems to be accelerating. I'm often caught in my desire to ignore it and hope it goes away, or shine a light on it hoping to expose the inanity of their thought but thereby lending it some kind of credibility. Beck's social justice equals communism is just his latest gimmick to try to distort the social discourse in America.

I mentioned him in an older post, but tend to try not to:
http://theendisalwaysnear.blogspot.com/2009/04/you-say-you-want-revolution.html

Glenn Beck is a thinner, younger edition of Rush Limbaugh, another US radio polluter you don't want to know. He invents "facts," imagines conspiracies and generally does anything he can to stir up anger on the right in order to enrich himself by getting high ratings on radio and tv and selling books. When called to account for the effects of his words, he claims to only be an entertainer with no responsibility for accuracy or for the actions of his followers. In other words, he is the worst of the USA personified.

I think I'm a little jealous of all you fortunate people who have never heard of Glenn Beck before.

I suspect, however, that more Christians have heard of Dorothy Day than have ever heard of Glenn Beck.

Not in America, where Fox is very big. He's a huge international star - everyone in Britain knows of him.