The Crystal Cave: an autobiography of Merlin the magician

The first part of a biography of Merlin the prophet and magician, mentor of King Arthur, based on the work of Geoffrey of Monmouth. 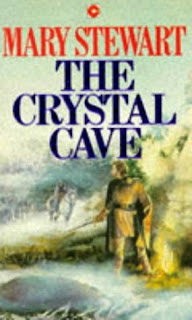 In this story he is the bastard son of a daughter of the King of South Wales, who refuses to reveal who is father was, and does not deny rumours that he was the son of the devil. In Stewart's story Merlin meets a hermit-prophet Galapas, who becomes his tutor, but runs away from home at the age of 12, fearing members of his own family.

As a fictional autobiography it makes a good story, but since it is written in the first person it gives a definite impression of the character of Merlin, which differs from that of other writers. Given the basic outline of the legend of Merlin (of which Mary Stewart gives a summary at the end, an author is given great freedom to shape that character as they wish, and in this book Merlin is shown as rather diffident and lacking in self-confidence. He has to be told by other people what he has prophesied, and even how he interpreted it.In this respect a more appropriate title for the book might have been The Reluctant Shaman.

Perhaps the weakest part of the book is the end, dealing with the conception of Arthur. I haven't read Geoffrey of Monmouth's original, so I'm not sure how much of the blame is his, and how much Mary Stewart's but it felt like an inauspicious beginning for a predicted marvellous reign. Merlin's grand scheme seems pointless, as does Uther's reaction

Other authors, medieval and modern, have written Merlin with a very different character, and I've wound some of them more convincing than this one.