The life and opinions of Tristram Shandy, Gentleman

The Life and Opinions of Tristram Shandy, Gentleman by Laurence Sterne
My rating: 3 of 5 stars

This book has been on our shelves ever since I remember; I think it belonged to my mother, though I don't know if she ever read it. Sixty years ago a friend at university who was doing English II said he was reading it, and remarked on its peculiarities, especially its extreme discursiveness, and the diagrams that appeared at various points in the narrative to illustrate this. 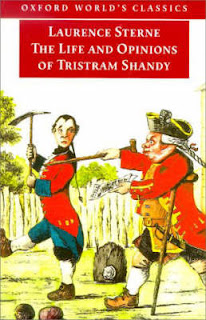 I tried to read it but lost interest, and so it sat on our shelves unread through several moves from one house to another, until the Covid19 epidemic came along, and with all the public libraries closed I turned to the unread books on our shelves and this was one of them.

The title tells us that it concerns "the life and opinions of Tristram Shandy, Gentleman", but there is little of his opinions and even less of his life. There are nine Books, each with over 30 chapters, and he only gets born in Book 4. The preceding books recount the lives and labours of the midwife and the obstetrician who attended his birth, and how the latter's use of new-fangled obstetrical forceps flattened his nose.

We learn a great deal about his Uncle Toby, whose hobby is playing soldiers since he was wounded at the siege of Namur, and about how Uncle Toby fell in love with and wooed the widow Wadman, with plenty of digressions along the way. It is said that Laurence Sterne pioneered the "stream of consciousness" novel which was popular in the early 20th century, and that could be so, as he tells the story the way most people think, jumping from one topic to another for no particular reason. 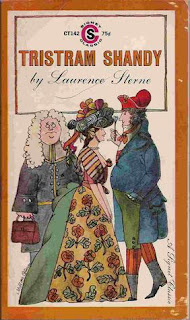 Though it was first written and published in the 18th century, it seems surprisingly modern. Much of the usage is still current today, and at several points I was surprised that usages I thought were quite recent seem to have been current 250 years ago.

I also think of all the books and articles and courses on creative writing, and how to write a novel, and what is acceptable to publishers' editors and what is not. And I think if I had been a publsiher's editor I would have rejected this one for its very discursiveness, it's failure to get to the point. Dammit, the protagonist has no goals! And a protagonist without a goal, we are told, is the biggest no-no in novel writing. Yet 250 years later Tristram Shandy is still in print, and a lot of novels published 10 years ago are not.

View all my reviews
Posted by Steve Hayes at 17:26