The light at the end of the tunnel

This picture has been doing the rounds on Facebook. 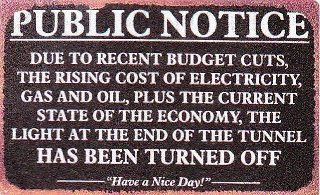 Talk of "the light at the end of the tunnel" always reminds me of an American, Gerry Jud, whom I met about 40 years ago.

I had recently been banned, which among other things confined me to the magisterial district of Durban, where I did not live and had no place to live, and I had no job and no income, and the ban prevented me from doing most of the kinds of work I was capable of doing, or even entering lots of places to look for a job (if you want to know more about what banning meant, see The Banned Waggon).

I was very kindly taken in by the Gilley family. Larry and Carol Gilley were American missionaries working for the Congregational Church in Southern Africa, and had a room in their backyard (originally built, as in so many Durban houses of that vintage, as "servants quarters") where I stayed for just over a year.

They had many visitors (whom I was not allowed to receive, but saw them just the same), and among these was Gerry Jud.

Gerry and Elizabeth Jud were from the Board of Homeland Ministries of the United Church of Christ in the USA (related to the outfit that had sent the Gilleys as missionaries) . They were on an extended self-funded study tour of the world, and had been in Jerusalem and Nairobi before coming to South Africa.

I liked the Juds. Gerry, particularly, talked my kind of language. He knew about demonic powers and spiritual warfare. He asked how people manage to stay on the tightrope.

Many overseas visitors to South Africa at that time (the early 1970s) asked things like "if things are as bad as you say, why aren't you all in jail?"

But Gerry could see that it is because evil is capricious; as C.S. Lewis said in Perelandra, it is like an imbeceile or a monkey or a very nasty child. It is petty, and so it is not consistent at all.

Gerry likened the action of the South African government in banning people and such to Robert Browning's poem Caliban upon Setebos -- choosing one crab in twenty, and twisting off its pincer, in a more or less random and capricious way.

He wanted to know whether I thought the church was the great whore. I said no, thinking of what Bonhoeffer had to say about it, or, in the words of John Davies, "those who are dissatisfied with the church as they find it should take note: 'Christian brotherhood is not an ideal which we must realise; it is rather a reality created by God in Christ in which we may participate. He who loves his dream of the community more than the Christian community itself becomes a destroyer of the latter, for it means that we are throwing God's gift to us, his brotherhood, back in his face. This is what the religious man does, the righteous sectarian. The very hour of my disillusionment with my brother becomes incomparably salutary because it so thoroughly teaches me that neither of us can ever live by our own words and deeds, but only by that one wood and deed which really binds us together, the forgiveness of sins in Jesus Christ'" (quoting from Bonhoeffer's Life together).

Later that evening (9 February 1973) a whole bunch of people came round for supper. I had made a pot of breyani. Norman and Estelle Hudson were there; Norman was the director of the Methodist Department of Mission, and also brought a guy called Andrew, from Parys, who was soon to join him. Duncan Davidson (another Congregational minister) was also there, and Jean Hendrikse, and Passionate Mdhladhla and Val Greene. It was the kind of social gathering I could go to jail for attending, if the fuzz happened to drop in.

Jean Hendrikse, Passionate and Estelle Hudson early got involved in a women's caucus around the kitchen table. Larry Hall's wife and Val Greene (Val and I were not yet married) stayed with us in the sitting room. Gerry got talking to this guy Andrew, and we continued our discussion from earlier.

I said that I was the only one who controlled the switch to the light at the end of the tunnel.

But I found this difficult to express, and also, I tend to lose my freedom for myself. I sometimes get very hung up on my relationships with other people, and when I am unsure of the love of my friends, then I begin to lose hope. The love of my friends, or the lack of it, is far more important to me than the hate of my enemies.

That's why solidarity is so important.

And that's why, whenever anyone talks about "the light at the end of the tunnel", I think of Gerry Jud.

Gerry also said he had spent some time in an Ashram in India to study Hindu mysticism, and a crow had crapped on him while he was sitting under a tree -- a message from on high that that just wasn't his scene, man.

And so
whenever anyone talks about the light at the end of the tunnel
I think of Gerry Jud
being shat on from above.
Posted by Steve Hayes at 08:48