You find some really bizarre stuff on the web but this is one of the strangest I've come across yet - on trains and individualism.

the real reason for progressives’ passion for trains is their goal of diminishing Americans’ individualism in order to make them more amenable to collectivism.

This comes from an article by Paul Krugman Diminished Individualism Watch - NYTimes.com commenting on something he wrote earlier about what someone called George Will wrote here: Will: Why Liberals Love Trains - Newsweek. I have no idea who George Will and Paul Krugman are, and I came across this series via theMiss Eagle Daily, a digest of tweets from a fellow blogger I follow on Twitter.

I have a certain amount of sympathy for George Will's doubts about the usefulness of high-speed trains. The Gautrain is due to come into operation later this year, and it has been a pretty expensive exercise. It is supposed to provide high-speed connections between Johannesburg, Pretoria and the airport.

But I cannot help remembering an earlier high speed train attempt, the Metroblitz of the 1980s. It required an expensive upgrading of the existing line between Johannesburg and Pretoria -- the one via Germiston. But by 1995 the train had been abandoned, and the coaches were lying, forlorn, vandalised and abandoned in a siding at Koedoespoort. 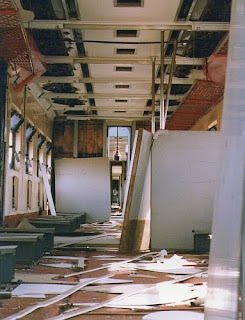 This picture shows the interior of the vandalised coaches. But a couple of years later most of the bodywork had gone too.

We rods on the Metroblitz once, when we had just bought our present house, and had to visit lawyers in downtown Johannesburg to sign some transfer documents. It seemed easier to go by train than look for parking in Johannesburg. But to get the Metroblitz we had to take a train from Sportpark in Lyttelton to the centre of Pretoria, because the Metroblitz did not stop at Sportpark. It went non-stop from city centre to city centre. It took 45 minutes, as opposed to the hour-and-ahalf of the regular trains.

Perhaps the Gautrain will improve on that. At least it has intermediate stops, and in places that people actually want to go to.

So yes, I have my doubts about high-speed trains.

The real problem with George Will's article is not his doubts about the economic viability of high-speed trains; it is the ignorant ideological claptrap that surrounds it. As Klugman points out: Dagny Taggart Wept - NYTimes.com: "But anyway, it’s amazing to see Will — who is not a stupid man — embracing the sinister progressives-hate-your-freedom line, more or less right out of Atlas Shrugged; with the extra irony, of course, that John Galt’s significant other ran, well, a railroad."

And then there is Will's Orwellian doublespeak of the "war is peace and peace is war" variety, when he ascribe to liberals a desire to destroy individualism and promote collectivism. Anyone with a rudimentary knowledge of history would know that the rise of liberalism cannot be separated from the rise of individualism. Perhaps George Wills is not a stupid man, but if he expects people to buy this "wet is dry and dry is wet" argument, he is either remarkably ignorant, or expects his readers to be.
Posted by Steve Hayes at 03:15

You read such articles and think that it's a clumsy attempt at humor. And then you realize that the author is completely in earnest.

I have encountered this "progressives love trains, so there must be something suspicious behind it" argument before. It's hard not to pity people who come up with such arguments.

Not even 1st April.

I love trains, in a commuting sense not an anorak type of way.

In the UK we once developed a train called the Advanced Passenger Train. To get round our tight tracks at higher speeds it used to tilt. Or so the idea goes. Scrapped once people realised that the concept was too advanced for current technology.

This comes from an article by Paul Krugman

Always be circumspect with Krugman.

This type of stuff is absolutely unbelievable - just when I was trying to persuade myself that the USA is not entirely on another planet.

But thinking about it, perhaps he has a - rather warped - point. The TGV works but is far more expensive than the budget airlines, making it actually much cheaper to fly within Europe than travel by train even though the train is generally more pleasant and convenient. But the budget airlines are wreaking havoc on the environment. To change peoples travelling patterns and protect the environment the state would have to intervene, and there you have that dreaded bogey of government intervention that these Tea drinking types hate so viciously. Of course they also seem convinced that there is no enviromental danger, just like Thabo Mbeki was convinced that HIV didn't cause AIDS, so they can continue on their merry way. I can't believe that anyone takes them seriously, but apparently people do.

"just when I was trying to persuade myself that the USA is not entirely on another planet."

-Yes, we are. Especially parts of the country. :-)

(Viewed this on the net - John)

(1) Three levels of LDS heaven: celestial, terrestrial, cholesterol !
(2) LDS houses are painted by Ladder-Day Saints.
(3) Brigham Young, when looking down on the Salt Lake Valley, said "This is the place." How come so many folks settled in that valley if he looked down on it?
(4) Did Adam Swapp get his wives at a Swapp meet?
(5) New Mormon cat food: 9 Wives !
(6) What's a plastic covered Indian? A laminated Lamanite. Of course I've known this since I was Nephite to a grasshopper.
(7) Mormon: Someone who is more man than woman. Is "Mormon" short for "More Money"?
(8) Mormonism teaches that we can know truth if there is a "burning in the bosom." Joseph Smith was the first Mormon who had a bosom below his belt !
(9) Brigham lived in the Lion House which helped him to keep on Lion.
(10) Utah is the only state where you can spell "Moron" with two m's. And it's the only state where the sheep take care of the cattle !

(Glenn Beck, Jon Huntsman Jr., Warren Jeffs, Thomas Monson, and Mitt Romney did not approve of the above humor.)

hi very interesting!!! any chance you could give me directions to these trains I would very much like to photograph them!