I’ve been trying to get a lot of stuff finished before Holy Week, and going on holiday in Bright (Easter) week. 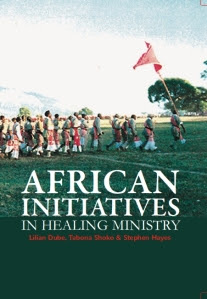 One of the projects at last nearing completion is the book African initiatives in healing ministry, which I’ve been working on for more than 10 years, and my coauthors have been working on for considerably longer. I’ve just signed off the final page proofs, and the book should be available in the next couple of months.

The core of the book is a study of healing ministry in four churches in Zimbabwe, one Anglican, one Roman Catholic, and two African Independent Churches, each of which has developed a slightly different response to health and healing.

As if to emphasise the urgency of this, someone I knew died of Aids last week. But he would not face up to the fact of his illness, and insisted that someone had been trying to poison him. His mother persuaded him to visit a sangoma, and to stop taking antiretrovirals, and to take traditional medicine instead. A bad decision, but for which he might have been alive today. This is one of the important health and healing issues in Africa today, and to grapple with it we need to understand attitudes to health and healing in Africa, and also the different Christian responses, and the attitudes that lie behind those responses. Hence the need for the research that led to the publication of this book.

Another task was the final indexing and proof-reading of the doctoral thesis of my colleague in ministry, Fr Athanasius Akunda, with whom I’ll be serving at the Good Friday liturgies later today.

(This is a post I tried to post here yesterday, but kept getting "Illegal date/time format" messages, so posted it on my Khanya blog instead).
Posted by Steve Hayes at 05:47