The Pope in Gauteng

Yesterday I had to take my son Simon to work in Johannesburg, and went to St Thomas's Church in Sunninghill where the Pope and Patriarch of Alexandria and all Africa was paying a visit. After a service in the church, the Patriarch had lunch with some of the parishioners.

One of the contrasts between Orthodoxy in America and Orthodoxy in South Africa is that in South Africa there is not the same ecclesiastical apartheid that one finds in America. St Thomas's is largely a Serbian parish. The parishioners are, for the most part, Serbian immigrants and their descendants, and they use the Serbian language in their services. But the Antimension on the Altar is signed by His Beatitude Theodoros, Pope and Patriarch of Alexandria and All Africa. People of all races and ethnic groups are welcome at St Thomas's, and one of the gifts presented to the Pope by Archimandrite Pantelejon was a picture drawn by his 7-year-old niece in Serbia, showing her uncle baptising black children in Johannesburg. Some of those who regularly attend St Thomas's are black South Africans from Klipfontein View, who used to belong to Tembisa, but find it easier to get to St Thomas's. 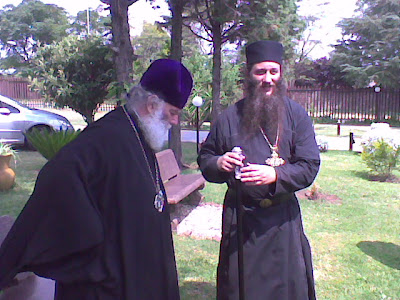 The Archbishop of Johannesburg and Pretoria, Metropolitan Seraphim, says that we should not refer to the "Greek Orthodox Church", but rather "The Orthodox Church of South Africa", or the "African Orthodox Church" because though there are Greek, Russian and Serbian parishes in the archdiocese, which maintain ethnic traditions and have services in those languages, the Orthodox Church is one church. So while the Patriarch visited St Thomas's, he was shown a classroom attached to the church hall, which is a Serbian School, and children are taught the Serbian language and history, and he approved of it. But in spite of the variety of ethnic groups and traditions, we are still one Orthodox Church, under one bishop and one Pope and Patriarch, and nobody asks the question, so common among Americans "What juridiction are you?" In South Africa, thank God, that question is meaningless.

Among the guests at lunch yesterday were Father Daniel, the new priest of the Church of St Sergius of Radonezh in Midrand, and Fr Seraphim (in the world Matthew van Niekerk), the first South African to be tonsured as a monk in South Africa, who is at the moment caring for the Greek parish in Klerksdorp. 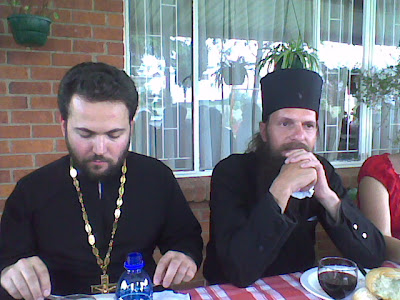 Fimi of the Patriarch of Alexandria: Tone 4

His Beatitude Theodoros
Most Divine and Most Holy
Our Father and Shepherd, Pope and Patriarch
Of the Great City of Alexandria
Of Libya, Pentapolis and Ethiopia
Of all the land of Egypt and All Africa
Father of fathers, Shepherd of shepherds
Bishop of bishops, thirteenth in line of the Apostles
And Judge of the Universe, Many Years!
Posted by Steve Hayes at 11:16

Very glad to see this kind of cooperation.

For theological school where do folks go? Greece? Serbia? Lebanon?