This is the third anniversary of the death of His Beatitude Petros, Pope and Patriarch of Alexandria and All Africa, who was killed in a helicopter crash on 11 September 2004. 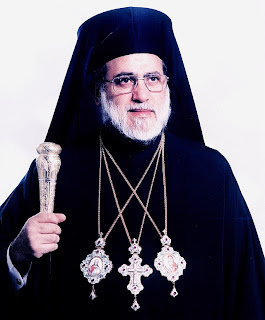 He was the spiritual leader of Orthodox Christians on the African continent, as the secular media would say. Several other clergy were killed with him on that day, including three bishops, so it was a severe blow to the Church in Africa.

Among those killed was His Grace Nectarios, Bishop of Madagascar, whose short period in that country as a missionary priest and later bishop was amazing.

Father Nectarios Kellis was a priest in Australia, and he read in a magazine published in Greece that a priest was needed in Madagascar, because they had been without a priest since 1972, when political changes had led to the expulsion of many foreigners, including the Greek priest.

Father Nectarios asked his bishop if he could go, but the bishiop said no, he needed him in Australia. As the computer fundi for the diocese, he would be hard to replace. But later the bishop relented. I can see that you will just be miserable if you don't go, said the bishop, so go with my blessing.

Father Nectarios went to Greece, and found the author of the article, so see how he could make contact with the people in Madagascar who were appealing for a priest. He was told that there weren't any. The person who wrote the article had made it up -- he had just seen that there hadn't been a priest there for a long time, and thought it would be nice if there was one.

Father Nectarios set out for Madagascar not knowing what to expect, and arrived there in 1994. He found two churches, neither in use, one in the capital, Tananarive, and one of the coast. There was a local family that was acting as caretakers of the church in Tananarive, and I met a member of this family, a young man, at the Makarios III Orthodox Theological Seminary in Nairobi in November 1995. I was then doing research for my doctoral thesis on "Orthodox mission methods", and was interviewing the students (who came from various parts of Africa) to find out how the Orthodox Church was growing in their home countries.

The story I heard from Madagascar was quite amazing. Father Nectarios had been there for 18 months, and had started 15 new parishes in that time. He travelled down the coast taking the student with him, and when he saw a village with no church, would speak to the chief of the village and ask if he could come on a date to be arranged to explain the Orthodox Christian faith to anyone interested. Then a few weeks later he would return and speak to the people there, and then gather the interested people to catechise them and baptise them, and so 15 new parishes had been started within 18 months.

At that time Madagascar fell under the Archbishopric of Zimbabwe, and Father Nectarios had travelled to Bulawayo where the Patriarch was blessing a memorial in the local church. While they were there, the Archbishop of Zimbabwe suffered a heart attack, so Father Nectarios stayed on for a few days to look after him. When he eventually returned to Madagascar, he had to change planes in Johannesburg, and as the plane for Madagascar only left the following morning he was booked into a hotel overnight near the airport. The hotel was in Isando, an industrial area, all over factories, where there is nothing to do and nothing to see, but the seminary student had given him my phone number, so he phoned me, and we said we would fetch him and show him around a little, rather than leave him sitting in a lonely hotel room. It was Monday 1 April 1996, in the middle of Great Lent, and we wanted to take him to supper at a restaurant, but finding a restaurant open on a Monday in Gauteng is not easy, never mind one that serves fasting food. Still, we took him round to see some churches and a priest we found at home, and while we were going around he told us the story of how he had found himself in Madagascar. He was quite a delightful character, short, with a reddish hair and beard, and he spoke Australian with a Greek accent.

Later Madagascar was made into a separate diocese, and Father Nectarios was consecrated as its bishop, and served there until his death on 11 September 2004. His successor was Father Ignatios Sennis, who had served as a priest in Calcutta (Kolkata) in India, where he served mainly among the very poor people.

The 11 September 2004 was a sad day for the Orthodox Church in Africa, and for those who died and their families we pray: Memory Eternal!
Posted by Steve Hayes at 08:33

Has anyone put together a detailed biography of Bp. Nektarios? I imagine it would make for wonderful reading.

I don't know of any biography, but it might be worth asking the OCMC -- if anyone has, they should know.