Do "left" and "right" in politics or economics mean anything?

For a long time now I have found it difficult to understand what people are talking about when they use terms like "left" or "right" to describe people's political positions. It seems that they can be used to mean opposite things, and none more so than in the following article, which I came across on the web yesterday -- The concerted, cowardly #MeToo attack on Harvard professor John Comaroff - World Socialist Web Site:

John Comaroff, professor of African and African American studies and of anthropology at Harvard University, has become the target of what has all the earmarks of another filthy #MeToo witch-hunt. In August 2020 Comaroff was placed on paid administrative leave in the midst of an investigation into several allegations of "unwanted touching", "verbal sexual harassment" and "professional retaliation."

Please read the whole article, and tell me which of the parties in the dispute described there are, in your opinion, the "left" and which are the "right".

From my reading of it, the source of the article is "left", Prof John Comaroff is "centre left", and his attackers are "far right" and exponents of the "cancel culture". But what do you think?

I've blogged about the left/right confusion before (see this article on the "theological left", for example), but the Comaroff one takes the cake.

The way I discovered this article, and the many other issues it raised, is quite complicated, and shows that the world is a lot weirder than I thought it was.

It began when a friend sent me an article claiming that the QAnon conspiracy theory in the US was started by a South African cartoonist and was based on African witchcraft. That sounded like a metaconspiracy theory on its own. It was a topic my friend knew I was interested in, and I've written a couple of children's novels and an academic journal article in which witchcraft is one of the themes. One of the things that interested me was the fact that there was almost no overlap between the bibliography in my article -- Christian Responses to Witchcraft and Sorcery -- and the QAnon one. 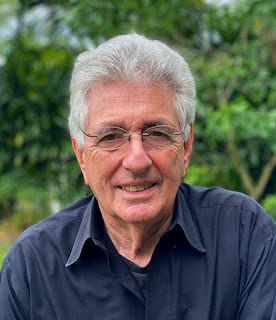 I therefore did a web search for articles by the anthropologists Jean and John Comaroff, using the search terms "Comaroff witch devil", and the list produced on my desktop computer, which uses the DuckDuckGo search engine, contained not a single academic journal article, but only news items about some allegations against Prof John Comaroff.

Later, working on my laptop, which uses Google as the default search engine, I wanted to read more about the controversy, and, using exactly the same search terms, not a single news article turned up, but only a list of academic journal articles.

Intrigued by this, I tried other search terms to find some articles on the controversy, but with no result. As far as Google was concerned, the controversy did not exist.

That is enough to make one suspect a conspiracy.

It's a conspiracy-theory generator par excellence.

Why was Google apparently suppressing the story of that controversy? Did they think it was fake news? But reading the article, it doesn't look like fake news. And there are apparently several other articles on the same topic which I haven't read yet. And if it were fake news, surely a web search would turn up something from Harvard University denying that such a controversy had ever taken place?

And then to add to it all, someone I've known online for several years, a fellow blogger who, like me, often blogs about the Inklings literary group and their writings, announced that she has a written a paper on Christian Nationalism and the occult -- another overlapping topic -- which appears in my children's books, and is of interest to me, since Christian Nationalism was the ideology behind the apartheid policy of the South African government between 1948 and 1994, which we thought was thoroughly discredited 30 years ago, but now seems to be making a comeback in some circles in the USA and Russia (try a web search on "Dugin").

It looks as though I have a lot more reading to do to catch up, but sifting out the fake news and the conspiracy theories and the metaconspiracy theories is not going to make it easier, especially in a world that, like Nineveh in Jonah's time, contains millions of people who don't know their left from their right.