The Caliban Shore: anatomy of a shipwreck

The Caliban Shore by Stephen Taylor
My rating: 5 of 5 stars

There have been many shipwrecks on the coast of southern Africa over the centuries, but only four stick in my mind -the wreck of the Grosvenor on the Pondoland coast in 1782, the Birkenhead just east of Cape Town in 1852, the Dunedin Star on the coast of Namibia in 1942, and the Oceanos in 1991, a little south of where the Grosvenor was wrecked. I learned about the first two at school -- they made it to the history books as being among the most famous shipwrecks on the southern African coast. The wreck of the Birkenhead was famous for establishing the principle of "women and children first", and the wreck of the Oceanos was famous for the abandoning of that principle.

All aboard the Dunedin Star and the Oceanos were rescued. Many of those aboard the Birkenhead died, but their fate was known. But the wreck of the Grosvenor became the stuff of legend, because the fate of the majority of its passengers and crew remains unknown to this day, nearly 240 years later. And that is what Stephen Taylor explores in The Caliban Shore -- what happened to the ship and the people in August 1782. In doing so he reveals some interesting facets of the history of India, southern Africa, and the UK.

The fascination of the story is partly in the mysteries. We quite enjoy watching the TV series Air Crash Investigation, where the interest is in the search to discover what happened and why. It is a puzzle to be solved. Was it a mechanical error or a human error, or an event outside human control, like weather, or a volcanic eruption? If it is a human error, it is sometimes caused by human relations -- what were the relations of the crew members? It can also be poor training and skill. These issues are explored in the TV series in a formulaic way, but in the case of the wreck of the Grosvenor, Stephen Taylor does it much more thoroughly. 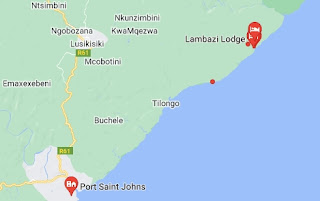 We learn something about the economics of India, and especially of the trade between India and the UK, which the British East India Company sought to monopolise, but though it dominated the trade, it did not control it completely. We learn, for example, that of the 740 tons of cargo that the ship could carry, the Captain was entitled to use 58 tons for his own personal trade. The Captain also decided who could be passengers, and how much they should pay.

In addition to the mystery of what led up to the fate of the ship, there is the mystery of missing persons. The fate of the majority of people on board remains unknown. The nearest port where they could hope to get a ship to continue their journey to Britain was Cape Town, 800 miles (1290 km) away, measured by modern roads, but in those days there were no roads for about half the distance. There were young children, pregnant women and sickly old people among the survivors of the wreck, and most of them did not survive the journey, or else gave up.

[author Stephen Taylor] examines all the known remaining records of the event to trace the lives and careers of those who were aboard to ship, to try to piece together what happened to each. Some are known to have died on the journey. Others were abandoned by their fellows in circumstances where they were assumed to have died. The route to Cape Town passed through a war zone; it was the beginning of the 100 Years War between the Xhosas and the Cape Colony, though history usually divides it into nine "Frontier Wars". And the Dutch who controlled the Cape Colony were at war with the British, so British ships did not call there. A few of the survivors managed to get on Danish ships. But some decided to stay put and settle where they were, among the local Pondo people, others may have done so, but it is not certain who they were, or where they settled.

The news of the shipwreck took a long time to reach Britain, and when it did it was sketchy and gasve rise to sensational and highly speculative press reports. The voyage from Britain to India in  the 1780s usually took 6-8 months. Much was made of the anxiety of the families of those involved, who lacked what the media nowadays call "closure". For many, it seems, the good news would be that their relatives had died, for to be marooned among a strange and unknown people was seen as "a fate worse than death".

For the local people, the wreck was both an opportunity and a threat. Pondoland had no deposits of iron ore, so people in the vicinity of the wreck, ignoring the castaways and their plight, set about burning the wooden wrekage of the ship to retrieve nails and any other bits of scrap metal they could find. When the castawats tried to approach them, they drove them away, and this was seen and portrayed as evidence of the "savagery" of the local people, though it seems that in our day people who are shipwrecked while travelling from Africa to Europe are treated just as badly by Europeans, who seem to be equally savage,

With hindsight, and research, Taylor explains this -- August, when the ship was wrecked, was the end of winter. The grazing was poor, the cattle were thin, and the previous season's crops were almost exhausted, so the prospect of 140 uninvited guests for dinner was just too much. Later, when the shipwreck survivors had split into smaller groups, they were treated more hospitably.

Another interesting thing is that the ship carried a report on corruption in the British East India company and its officials. Both the report and the bearer failed to make it to Britain as a result of the wreck. I found this interesting because I studied a related incident in history at university -- the Impeachment of Warren Hastings. This book made a great deal more sense of what he was impeached for and why, and perhaps also helps to explain some events in our own time, when the Gupta brothers engaged in state capture in South Africa, and promoted corruption in business, the civil service and in state-owned enterprises. It seems that the British East India Company was very much into state capture. I'm not sure whether they started it or just passed on what they had received from others, but it seems that the Guptas were heirs of that tradition, and have passed it on to the RET crowd in South Africa.

The books explores the history, the legends and the rumours, and tries to establish, as far as possible, what actually happened. So there is history, an investigation into a shipwreck, a survival story, and a search for what happened to missing persons as well.