Canon John Suggit celebrated his 100th birthday in 2022, and various people who had known him were asked to contribute their memories of him to a commemorative booklet. Owing to the vagaries of email my contribution arrived too late for inclusion in the volume, so I'm posting it here instead.

I first met John Suggit in October 1968, when he was Warden of St Paul's Theological College in Grahamstown. Within a couple of weeks of meeting him, I was convinced that he was a saint. To explain this, I need to explain the circumstances of our meeting.

In 1966 I had gone to study for a post-graduate Diploma in Theology at St Chad's College, Durham. That had been arranged by the Anglican Bishop of Natal, Vernon Inman, and in June 1868 I had written my final exams and gained the diploma. But St Chad's College had a two-week September term for those of its students who were preparing to ordination in the Anglican Church.

I met Bishop Inman, who was in the UK for the Lambeth Conference, and he said that if I wanted to go home rather than hanging around for the September term, he would try to arrange for me to spend a term at St Paul's in Grahamstown instead. I eagerly accepted, and thought it would be interesting to see how South African theological education compared to the English version.

The principal of St Chad's College, John Fenton, was a fan of Rudolf Bultmann's theology and demythologising the gospel, and though I thought he was a very nice bloke, we did not see eye-to-eye theologically at all. The first essay he had asked me to write was on Jesus and the demons, and after I had read it to him he said I had not told him whether I thought the demons existed, and I had tried to explain to him that, coming from South Africa, with it's demonic system of apartheid, the question of whether the demons existed seemed unreal. When one is run over by a bus in the street, one does not, while lying in the road in pain, start asking philosophical questions about the existence of the bus. As another wise priest said, when I had told him about this, "The question of the existence or non-existence of demons is not important. The important thing is that, whatever demons are, Christ has the mastery of them."

So I returned to South Africa in July 1968, and prepared to go to St Paul's for the September term.

John Suggit wrote to me and said that he had heard that I had a beard, and that St Paul's had a rule that students were not allowed to have beards. I thought it was a silly rule, but I wrote back to him and said that if one wants to join a Christian community, one accepts it as it is, with all its customs and idiosyncrasies.
I arrived in Grahamstown on 5 October, and immediately went to meet John Suggit. To arrange what I should be doing during the term. I was under do academic pressure, having already written and passed my final exams for the Diploma in Theology at Durham, so he said I should attend ethics seminars and pastoral lectures, and read widely in the college library.

He asked me about life at St Chad's College, and immediately impressed me as someone who was concerned to do what was best for the students to prepare for future ministry, and was open to new ways of doing things. 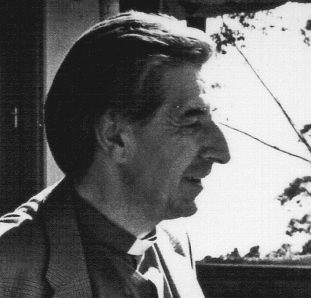 I was impressed by John Suggit's wisdom in setting that exercise, encouraging the discovery of new knowledge, and the gaining of new insight. A week later I read my paper to a seminar group, but the discussion that followed was disappointing and mainly concerned the relation of law to gospel, and whether one should hand over law-breakers to the police, and rather seemed to miss the point. Nevertheless, I was grateful to John Suggit for setting me that task, and it gave me something to think about.

St Paul's College was not isolated from other currents in life and society. Across the valley was Rhodes University, and the then fairly new University Christian Movement (UCM) was in full swing, with a triumvirate of radical Methodist ministers were trying to introduce the latest Western theological trends to South African students, such as the mainly-American "God is dead" theology. Other Methodist ministers, like many of the St Paul's students, were more interested in a more indigenous South African initiative, A Message to the People of South Africa, published a few weeks earlier by the Christian Institute and the South African Council of Churches. It noted that the official ideology of apartheid was not merely a heresy, but a false gospel; it was not just unjust in its implementation, at was radically anti-Christian in principle. This, it seemed to most of us at St Paul's, was far more significant than the imported American theothanatology being propagated by UCM.

John Suggit was known to the St Paul's students as Fronnie, derived from the Greek word fronimos, meaning mentality, or state of mind. The students seemed to think that it meant over-subtle or devious, but after I had been at St Paul's for 10 days I wrote in my diary:

I suppose I have now been here long enough to make some sort of judgement on the place, and make some comparisons with St Chad's. In obvious things, the discipline here is far stricter, but that doesn't matter, because it is at least a genuine expression of some sort of Christian community. At St Chad's the rules were ignored because there was no cohesion, the confusion and loss of identity, which was the dominant feature of St Chad's, may be yet to come here. St Paul's may not yet have experienced the winds of change, and doubts and confusion that have hit the Church of England. There is some measure of concord between principles and practice, between politics and theology and liturgy.

The Warden, Fronnie Suggit, is also a very good bloke. One cannot say of him, as we did of John Fenton, "White man speak with forked tongue." Fronnie is a man of no guile. His practice reflects his principles. He is gentle, loving and concerned. He takes an interest in people, and tries to understand them. Fenton was remote, insulated by his risqué jokes, and making of outrageous statements without being able to show what they mean in practice. Fenton gives unconvincing reasons for doing things, because you feel that he himself has not been convinced. Fronnie seems to do things only when he himself is convinced about them, and though I think in some things he is wrong, at least his conviction is genuine. That at least makes it possible to bargain, to compromise, to agree to differ. And coming here has also exposed, once and for all, the myth that "overseas" things are better. Certainly St Paul's is better than any theological college I have seen elsewhere. The system may be open to criticism on many grounds, but whatever its faults, it works. More than ever I am convinced that it would be desirable for some English ordinands to come here -- not only because it might broaden their outlook to go to another country (which is the only advantage I can see in sending South Africans to England), but also because they would get a better theological training.

And if, like some students at St Chad's I might say of the Principal, "white man speak with forked tongue", by then I was saying of John Suggit that "he speaks with authority, and not as the scribes."

Not that I disliked John Fenton. He was a very likeable person, and after leaving St Chad's I corresponded with him occasionally until his death, but his theology seemed somehow defective and uninspiring, and in spite of his admiration for Bultmann and Bultmann's supposed existentialism, he would sometimes say some very unexistential things. For example, he once said that he did not believe in the Kingdom of God. So we asked him why, if he did not believe in the Kingdom of God, did he think it important that we attend daily Mattins and Evensong. And his reply was "Because you've got to do it when you get into a parish." And I was sure that John Suggit believed that daily Mattins and Evensong were important because he believed in the Kingdom of God. When worship is divorced from life and genuine faith it becomes of no more value or significance than the musical banks of Samuel Butlers Erewhon.

A few days later, on 18 October, St Luke's Day, when I had known him for just a fortnight, I wrote in my diary:

After supper there was Evensong, and Fronnie gave an address on the new theology of secularisation and the death of God, and pointed out their limitations. I find myself believing everything he says, and he is one of those blokes where it doesn't matter what he says, because if he says it, it must be all right. He is, in short, a saint.

After leaving St Paul's I saw John Suggit quite rarely, either when passing through Grahamstown, or at synods, but on those kinds of occasions there was little opportunity to speak for long.