The Dark is Rising

The Dark is Rising by Susan Cooper
My rating: 4 of 5 stars

When a reviewer of one of my books, Of Wheels and Witches, compared it with this one, and suggested that it might have been influenced by the The Dark is Rising sequence, I thought I'd better read it. So I read Over Sea, Under Stone which I enjoyed a lot, and now have read this one, which I didn't enjoy quite so much, and in writing this I'm trying to work out why I gave the first book 5 stars, and this one only 4.

There is little to link the two books. Over Sea, under Stone was set in Cornwall, this one is set in Buckinghamshire, with a completely different set of characters. Will Stanton is the youngest of a family of nine children, and discovers , on the day before his 11th birthday, that he is an "Old One" and that he has a quest to perform, to collect six signs made of different materials. 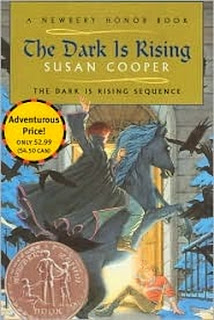 He is helped in this by a more experienced Old One, Merryman Lyon, who is the only character who seems to have been in Over Sea, Under Stone, and another family who live on a nearby farm, whom he discovers are also Old Ones, and he is hindered in his task by a couple of characters called The Walker and The Rider.

*** Possible spoiler alert -- if you haven't read this book, and want to, you might want to stop reading at this point, as it has possible plot spoilers ***

The book never explains who the Old Ones are, but we are told that they have a lot of superpowers not accessible to ordinary people, and the young/old Will Stanton learns how to use these powers by instantly absorbing a magic book. And this is, I think, why I liked this story less than Over Sea, Under Stone. The children in that book, unlike Will Stanton, are ordinary children with no superpowers. As G.K. Chesterton puts it, in his book Orthodoxy:

...oddities only strike ordinary people. Oddities do not strike odd people. This is why ordinary people have a much more exciting time; while odd people are always complaining of the dulness of life. This is also why the new novels die so quickly, and why the old fairy tales endure for ever. The old fairy tale makes the hero a normal human boy; it is his adventures that are startling; they startle him because he is normal. But in the modern psychological novel the hero is abnormal; the centre is not central. Hence the fiercest adventures fail to affect him adequately, and the book is monotonous. You can make a story out of a hero among dragons; but not out of a dragon among dragons. The fairy tale discusses what a sane man will do in a mad world. The sober realistic novel of to-day discusses what an essential lunatic will do in a dull world.

That makes Will Stanton seem like something out of The Midwich Cuckoos other than being on the side of the good guys. It cuts him off from normal human relations with his family, but not for normal human reasons, but rather for inhuman ones. 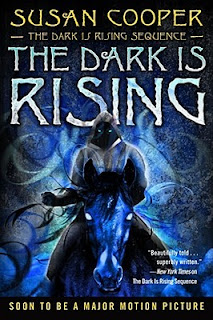 The reviewer of my book also detected the influence of Charles Williams, whose novels I have read, and whose influence I freely acknowledge. Interestingly enough The Dark is Rising has several scenes which are reminiscent of Charles Williams's novel The Greater Trumps. In both books the family goes to church on Christmas day for Anglican Mattins, and on the way home rescue a homeless wanderer from a snowstorm which turns into a supernatural blizzard. The difference is that in The Greater Trumps the characters are normal human beings, though they do have access to magical objects. In The Dark is Rising, however, there is a deus ex machina in almost every chapter, and sometimes more than one.

At one point Will Stanton does face a moral choice where his decision could make a difference, when the bad guys have kidnapped his sister Mary, and they threaten to kill her if he does not hand over the signs he has gathered. He refusesw, but Mary is in no real danger, because she is rescued by a deus ex machina.

I did enjoy reading the book, but I don't think it was as good as the first one.

And then, going beyond simply reviewing this book, I come to the comparison with my own. If there were some things I didn't much like about this book, how did I do it differently (or try to -- it is for the reader to judge whether I succeeded) in my books?

In my children's book Of Wheels and Witches and its sequel The Enchanted Grove the child characters are normal human beings, with no superpowers. Some of their opponents are human, and some have magical or supernatural powers, so there is a fantasy element in the books, but I have tried to give the children moral agency, so that their choices do make a difference, and do have consequences, some of which could be foreseen and others not. But as I said, it's up to the reader to judge how well I succeeded.

Yes, there is that about William.

When Over Sea, Under Stone was written, it was as a standalone book. When she wrote this, she knew she had three more books to go, so a lot of it is "setup" for those other books.

Oh, and the Drew children do return.