... pro-Trump Christians have emphasized a new reason to be afraid. The United States, they say, is devolving into such wanton “paganism” that the country may not survive. The true America awaits rescue by the Christian faithful, and in such an existential struggle, nearly any means are justified—even reelecting a morally abhorrent president. Examples of this rhetoric are not in short supply, among pundits and even in more scholarly work. In an essay praising Donald Trump’s “animal instinct” for “order” and “social cohesion,” Sohrab Ahmari opposed an America of “traditional Christianity” to one of “libertine ways and paganized ideology.” These are our only choices, he insisted. Between such incompatible enemies, there can be only “war and enmity,” so true believers should be ready to sacrifice civility in the battles ahead to reconquer the public square. Rod Dreher has speculated that Trump, while unpalatable, could be a divine emissary holding back the horrors of Christian persecution, like the biblical figure of He Who Delays the Antichrist, an implicit nod to old pagan enemies. “If Christians like me vote for Trump in 2020,” Dreher warns, “it is only because of his role as katechon in restraining what is far worse.” Though in a calmer tone, Ross Douthat entertained similar ideas in his column “The Return of Paganism,” wondering if the pantheist tendencies in American civil religion could morph into a neo-paganism hostile to Christian faith.

But this article suggests that they are looking for the danger of modern paganism in all the wrong places, and seeks to show where the real danger lies. The article is written from a Roman Catholic point of view, but there is little in it that I, as an Orthodox Christian, can disagree with, and it deserves a careful reading by all Christians.

Bur before going any further, some clarification of terms may be needed, and especially the terms paganism, secularism. and syncretism. David Albertson does this to some extent in the article, but not really enough.

Paganism is Christian slang for anything not Christian. As the historian Robin Lane Fox puts it in his book Pagans and Christians,


In antiquity, pagans already owed a debt to Christians. Christians first gave them their name, pagani... In everyday use, it meant either a civilian or a rustic. Since the sixteenth century the origin of the early Christians' usage has been disputed, but of the two meanings, the former is the likelier. Pagani were civilians who had not enlisted through baptism as soldiers of Christ against the powers of Satan. By its word for non-believers, Christian slang bore witness to the heavenly battle which coloured Christians' view of life.

Since the middle of the 20th century there have been various groups who call themselves Pagans, and are sometimes called Neopagans, who have sought to revive pre-Christian religions in predominantly Christian or post-Christians societies. Albertson's article is not referring to such groups, and Eliot almost certainly wasn't. 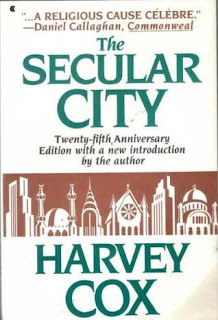 Secularism is pagan in the sense that it is not Christian, but about 50 years ago Harvey Cox, in his book The Secular City, made an important distinction between secularism, which is an un-Christian (and sometimes anti-Christian) ideology, and secularization, which is a social process that is quite compatible with the Christian faith and indeed in many respects springs from it.

For example, in 1538 the government of England ordered every parish in the Church of England to keep registers of baptisms, marriages and burials. Thee hundred years later, in 1837, the English government introduced secular registration of births, marriages and deaths. That was secularization, which relieved the church of the burden of having to collect records on behalf of the government (though it could still do so, on its own terms, to keep track of irts own members).

Syncretism is the blending of two or more religions so that a new religion results which is different from either. Puritans often claimed that Christian celebrations such as Christmas and Easter were either pagan or syncretistic, and at times tried to suppress them. For more on this see Evangelicals and Hallowe’en | Khanya.


To socialists, all that really exists is the material world. In fact, Karl Marx, the father of socialism/communism, invented the notion of dialectical materialism — the belief that matter contains a creative power within itself. This enabled Marx to eliminate the need for a creator, essentially erasing the existence of anything non-material.

To socialists, suffering is caused by the unequal distribution of stuff — and salvation is achieved by the re-distribution of stuff. There's no acknowledgment of spiritual issues. There's just an assumption that if everyone is given equal stuff, all the problems in society will somehow dissolve.

The article is thoroughly disingenuous, full of misleading assertions like this one, and in fact tries to fuse the pagan ideology of Neoliberalism with Christianity to form a syncretistic mixture.

I far prefer what Nicolas Berdyaev, the Christian philosopher, has said about this:


It was the industrialist capitalist period which subjected man to the power of economics and money, and it does not become its adepts to teach communists the evangelical truth that man does not live by bread alone. The question of bread for myself is a material question, but the question of bread for my neighbours, for everybody, is a spiritual and religious question. Man does not live by bread alone, but he does live by bread and there should be bread for all. Society should be so organized that there is bread for all, and then it is that the spiritual question will present itself before men in all its depth. It is not permissible to base a struggle for spiritual interests and for a spiritual renaissance on the fact that for a considerable part of humanity bread will not be guaranteed. Such cynicism as this justly evokes an atheistic reaction and the denial of spirit. Christians ought to be permeated with a sense of the religious importance of the elementary needs of men, the vast masses of men, and not to despise these needs from the point of view of an exalted spirituality.

To expand a bit on what Berdyaev said, the article displays a lack of knowledge of what socialism is.

As Berdyaev points out, it was capitalism that introduced a thoroughly materialistic world view. Socialism, in its varied forms, is a reaction to capitalism, largely with a view to remedying its defects.

Capitalism, as Berdyaev points out, subjected man to the power of economics and money.

The principle behind most forms of socialism is that man should control the economy rather than be controlled by it. That doesn't mean that every form of socialism is automatically good, but it does mean that it should not be simplistically dismissed as "materialistic" as this article does.It is materialistic because it is responding to a materialistic system, namely capitalism.

Capitalism arose in history out of a set of economic circumstances, generally in the 15th & 16th centuries. It wasn't really a matter of conscious human design, it just happened.

Later people tried to analyse how it worked -- Adam Smith, Karl Marx and others. Some, like Adam Smith, thought it would work OK if you left it alone. Others, like Marx, pointed out that it caused widespread misery -- and between Smith and Marx came the industrial revolution, which may have affected their analysis.

Socialism was a human reaction to the social effects of impersonal economic forces, and came up with various proposals for remedying the defects of capitalist society.

So saying that socialism is antithetical to Christianity really means that Christianity should never criticise capitalism.

Well, there are two ways of looking at it.

One is that the economic powers are among those referred to in Romans 13
as ordained by God, and to which man must therefore be subject.

Another is that they are among the weak and beggarly elemental spirits
that St Paul thinks have bewitched the Galatians (Gal 3:1-4:9).

What do you think?

Another aspect of Albertson's  article that is very interesting is that though he deals primarily with the USA, there are some notable similarities between the Cult of Trump and the Cult of Rhodes in southern Africa -- it ios the same kind of pagan impulse driving both.