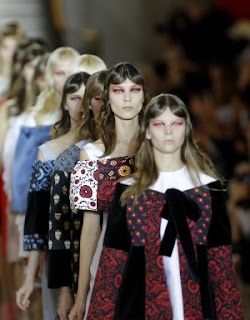 I thought that the job of fashion models was to show off the clothes and persuade people to buy them, but here one barely notices the clothes at all, and all you see is that procession of shopwindow mannequins with reanimated corpse expressions on their faces.
Posted by Steve Hayes at 06:39

There's a really camp element behind both the fashion game and the PTB. Same element and it's where the trouble comes from.