Postcolonialism perhaps needs to come to the rescue of Greece now.

Hat-tip to Notes from a Common-place Book: Rethinking Greece: "Greece has been in the news a lot recently, and not in a good way. This article, by George Zakardakis, puts the crisis in historical perspective--always a refreshing touch."

When the Greek crisis began two years ago, the cover of a popular German magazine showed an image of Aphrodite of Milo gesturing crudely with the headline: "The fraudster in the euro family." In the article, modern Greeks were described as indolent sloths, cheats and liars, masters of corruption, unworthy descendents of their glorious Hellenic past.

The irony was that modern Greece has little in common with Pericles or Plato. If anything, it is a failed German project.

In 1832, Greece had just won its independence from the Ottoman Empire. The "Big Powers" of the time, Britain, France and Russia, appointed a Bavarian prince, Otto, as Greece's first king. Otto arrived with German architects, engineers, doctors and soldiers and set out to reconfigure the country to the romantic ideal of the times.

It seems that no sooner was Greece decolonised by the Turks than it was recolonised by the Western European countries who imposed their own ideas on it, rather along the lines of Edward Said's Orientalism. 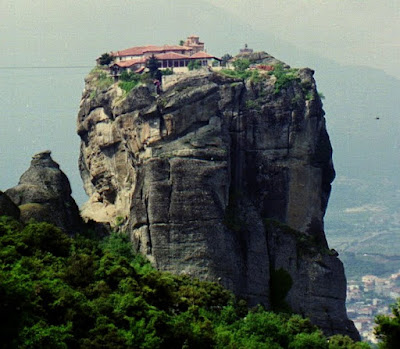 For romantically-minded Westerners of the 19th century monasteries like those at Meteora (above) were not the "real" Greece.

the intellectuals dream of a truly Westernized Greece through some miracle of economic and social science. When the loan referendum was announced, most of them opposed it. Greece had to show that it belonged to the European family of nations, whatever that may mean. Rebellion was not to be tolerated, lest the country was kicked out of the euro, the symbol of Greek westernization.

Ultimately the intellectuals and politicians, with persuasion from angry European leaders and technocrats, had the referendum quashed. Besides, the invention of fantastical modern Greece demanded that its people, the third division of society, also remained imaginary.

Naturally, they are real as anything. They despise the loss of their sovereignty as well as the bitter medicine prescribed by their European brethren for their "rescue." Austerity enforced by unelected officials from the European Commission, the International Monetary Fund and the European Central Bank is perceived as not remedy but punishment, a distasteful concept to the orthodox Greeks whose core value is mercy.

And that is one of the primary differences between the Orthodox Christianity of the Greek people and the pagan Greece of the Western romantic imagination. Mercy is indeed a core value of Orthodoxy.

You only have to attend a few Orthodox servicesw to become aware of this "Lord have mercy" Kyrie eleison repeated three, 12 and sometimes 40 times.

Orthodox Christians know a God who says "I desire mercy and not sacrifice", but the Westerners demand more and more sacrifices, human sacrifices, of the ordinary people of Greece, and "mercy" is an utterly foreign concept to them.
Posted by Steve Hayes at 18:58

Orthodox Christians know a God who says "I desire mercy and not sacrifice."

This is so and I've only had good experiences with the Orthodox. Somehow, theologically, they seem closer to the source too.