Give a dog a bad name

"Sticks and stones can break my bones, but words can never hurt me."

Such was the reply often given to playground taunts and insults in my youth.

But a recent discussion on the alt.usage.english newsgroup puts a new slant on it. 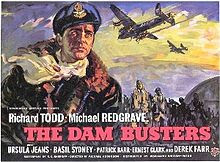 People were discussing the remake of the film The Dam Busters, a true story of how the British attacked German dams in WW2 by using an ingenious technique to drop bombs where they would be most effective.

Apparently the remake hit a snag.

Squadron Leader Guy Gibson, who led the raid, had a pet dog, a black Labrador called "Nigger", and it was decided to use the dog's name as a code name to indicate that the first raid had been successful.

The WikiPedia page on the film, and the proposed remake, describes the problem as follows The Dam Busters (film) - Wikipedia, the free encyclopedia:

The British Channel 4 screened the censored American version in July 2007, in which the dialogue was dubbed so as to call the dog Trigger, this screening taking place just after the planned remake was announced. For the remake, Peter Jackson has said no decision has been made on the dog's name, but is in a "no-win, damned-if-you-do-and-damned-if-you-don't scenario", as changing the name could be seen as too much political correctness, while not changing the name could offend people. Further, executive producer Sir David Frost was quoted in The Independent as stating: "Guy sometimes used to call his dog Nigsy, so I think that's what we will call it. Stephen has been coming up with other names, but this is the one I want." In June 2011, Stephen Fry mentioned in an interview that the dog would be called Digger in the remake to avoid offending modern audiences. In September 2007, as part of the BBC Summer of British Film series, The Dam Busters was shown at selected cinemas across the UK in its uncut format.

The discussion on alt.usage.english was mainly concerned with the issue of the dog's name. The original name is now regarded as offensive in America, so using it might harm the film at the box office. But changing the name of the dog would be historically inaccurate.

Discussion went back and forth for a while, and eventually someone said:

I don't see what harm it does to change the dog's name consistently in the dialogue, just so people don't repeatedly cringe until it gets run over. (I haven't seen the original film; I'm trusting what someone else said in this thread.) They could put a note up at the beginning or end of the film briefly explaining the deviation from historical accuracy.

And Peter Brooks of Cape Town made a comment that put the whole discussion in perspective:

Cringe? There's a film showing people getting ready to kill tens of thousands of innocent civilians by drowning and people watching it cringe because of the name given to a dog? What kind of perverted system of values could lead to that?

Another Wikipedia article describes the results of the first raid Möhne Reservoir - Wikipedia, the free encyclopedia:

The resulting huge floodwave killed at least 1579 people, 1026 of them foreign forced labourers held in camps downriver. The small city of Neheim-Hüsten was particularly hard-hit with over 800 victims, among them at least 526 victims in a camp for Russian women held for forced labour.

Nice articles. I'm just blogwalking and very happy to stop here. And also give you some comment here.

Dont forget to give us some your comment into my blog too.