Newsweek has really jumped the shark this time. They've just run an article on "the new faces of the religious right", and they seem to have got it all wrong. Among the people they have included is Jim Wallis, regarded by most on the religious right as a dangerous leftist, and certainly one who has been active in trying to move American evangelicalism leftwards -- at least closer to the centre even if not to the actual left.

Faces of the Christian Right - Newsweek:

Who speaks for the religious right? That used to be an easy question to answer: on matters of faith and politics, Jerry Falwell, Pat Robertson, and James Dobson were towering figures: opinionated, controversial, and vastly influential. But with Falwell’s death in 2007, Robertson’s outlandish comments about the 2010 earthquake in China and Hurricane Katrina, and Dobson’s gradual retirement, it’s harder to pinpoint a similar council for the second generation of the movement, which is more strategically, denominationally, and ideologically diverse. Many of the new leaders don’t subscribe to the (figuratively) bomb-throwing tactics their forebears did. 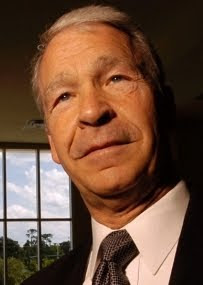 And accompanying the Newsweek article is this picture of a Dr Verwoerd look-alike. No doubt that is a suitable picture to illustrate the "right", as Verwoerd's right-wing credentials must surely be impeccable, but Dr Verwoerd was hardly "religious". He hardly ever talked about God, and the closest he ever got was some vague references to "Providence". Newsweek doesn't tell us who is in the picture -- the closest thing to a caption is "Phyllis Redman / MCT Landov", which is rather uninformative. That guy doesn't look like a Phyllis to me.

But Jim Wallis and "Religious Right" surely don't go together.

And Jim Wallis is the only one on Newsweek's list of names that was even vaguely recognisable. I knew of Jim Wallis through an American Evangelical acquaintance, Dick Peace, who worked in South Africa 40 years ago, and when he returned to the US told me that there were some American Evangelicals who were not politically apathetic, as most of them were back then, but that some were trying to promote interest in social justice, and referred us to Sojourners, which was founded by Jim Wallis. The following decade saw the rise of the American religious right, which promoted the cause of social injustice, and was hardly to be linked with Jim Wallis.

The American religious right has been influential to some extent in Africa, and its ideas have been disseminated through videos and visiting speakers and the kind of religious books sold in secular bookshops, and have resulted in the formation of Neopentecostal denominations that promote those ideas, sometimes contextualised for Africa.

At one time I used to receive the Sojourners e-mail newsletter, but I gave it up because it did not have a global perspective, but seemed to be almost entirely concerned with American domestic politics, and kept referring to the names of people who were obviously farmiliar to their audience, but most of whom I had never heard of.

But for those familiar with and interested in American parochial politics and religion, the Newsweek article has been analysed and deconstructed at Um, Wallis represents the new Christian right? | GetReligion:

That Newsweek piece is abysmal. My favorite quote? “It’s not as sexy as praying with the president.” [In the bio of Melissa Rogers] Since when is Palin an “evangelical rock star”? [In the bio of Marjorie Dannenfelser] The bit about Cizik is wildly inaccurate - he never backed gay marriage. [In the bio of Jim Wallis]

This guy makes young journalists everywhere look bad. The arrogant sarcasm running throughout this piece is inexcusable; it’s not even appropriate for the op-ed page!

Cracked me up Steve. Thanks for that. I'm wondering if the confusion with Jim Wallis is because he belongs to the EVANGELICAL left. Some people's understanding is so one dimensional that they simply can't grok such a thing.

There's no such thing as left and right anyway. There's Statist and free society and Christians are for the latter - one can't serve two masters.