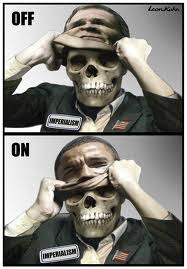 US President Barack Obama based his election campaign on change, and one of the things he promised to change was the detention without trial system introduced by his predecessor, George W. Bush. Obama managed to create the impression that he would get rid of the Guantanamo Bay detention camp within a year.

But not only is the Guantanamo Bay camp still there, but now Obama's advisors are urging him to make detention without trial a permanent feature of the US polity.

Hat-tip to Obama's liberty problem: A conservative blog for peace

Advisors in the Obama administration have floated the idea of creating a special new legal system to indefinitely detain people by Executive Order.

Why? To do something with the people wrongfully imprisoned in Guantanamo. Why not follow the law and try them? The government knows it will not be able to win prosecutions against them because they were tortured by the US.

Guantanamo is coming up on its ninth anniversary – a horrifying stain on the character of the US commitment to justice. President Obama knows well that Guantanamo is the most powerful recruitment tool for those challenging the US. Unfortunately, this proposal for indefinite detention will prolong the corrosive effects of the illegal and immoral detentions at Guantanamo rightly condemned world-wide.

Needless to say, this is thoroughly bad advice, and one can only hope that he will not take it, and also that he will sack these advisors and appoint others who have a better understanding of all those good things like freedom and democracy.
Posted by Steve Hayes at 03:57