I went down to the post office today, to collect a parcel someone had sent me. It took a while to open it, as they were busy mopping the floor. There had been a flood, with all the rain we've had lately.

They are also busy renovating the exterior. It was done about 20 years ago -- actually the entire interior was rebuilt, and modernised, and they just kept the facade -- they had to do that, as it is a historical monument, and part of Church Square in the centre of Pretoria. Back then they renovated the facade too, but it was built of sandstone, which doesn't weather very well, and it took only about 10 years for the repairs to wash off. So now it looks as though they are preparing to do so again, but this time they will replace the sandstone with more durable granite. Here it was, ready to be put in. 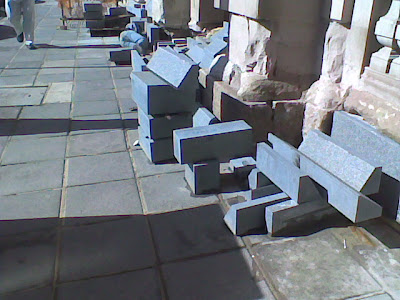 I hope it lasts longer than 20 years this time!
Posted by Steve Hayes at 15:04

It seems the rain is everywhere.