Can Christianity be saved from empire

Can Christianity be saved from empire? was the title of Prof Nico Botha's inaugural lecture as professor in the Department of Spirituality, Church History and Missiology at the University of South Africa (Unisa) last night.

I wouldn't dare attempt to summarise his lecture in a blog post -- for one thing he left large chunks out, and Dr Puleng LenkaBula's response, which summarised it, lasted half an hour. But there are some points that I'll comment on.

He noted that Christianity has both imperial and anti-imperial aspects. The language of Christianity is imperialist - Jesus is Lord, the Kingdom of God, etc. This goes back to the beginning. Though Abraham is a landless wanderer, he is promised that he will be the father of a great and mighty nation. Joseph had a cosy relationship with the Egyptian empire. 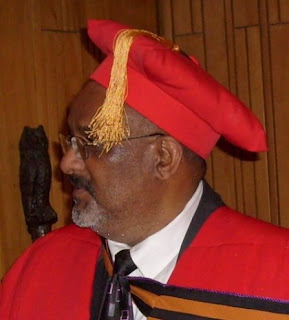 Nico spoke of the church as a parasite or hybrid, living in the space in between, and mentioned another theologian (I forget who) who had spoken of Jesus as being a sort of parasite or hybrid, being both God and man. But I'm not sure that that is the best image of the incarnation.

But all the way through his lecture I kept thinking that I would like Nico to come round to our place and see the film Ostrov (The Island), and discuss it afterwards, because it seems to relate to so much of what he was talking about. And after the lecture Val said the same thing -- she kept thinking of different parts of the film. Since we have the film on DVD I'm still hoping we may be able to gather a few people to watch and discuss it, since it seems to link to so many issue that people are talking about.

Apart from the lecture itself, it was good to meet old friends from the Unisa missiology department like Klippies Kritzinger and Willem Saayman, and catch brief glimpses of others that I knew, like Karabo Makofane, Annalet van Schalkwyk and Piet Meiring. I hoped that I might meet fellow blogger Reggie Nel, but didn't.
Posted by Steve Hayes at 08:15

I don't think He ever did.