Historical mysteries, adventure tales, and books inspired by them

She by H. Rider Haggard
My rating: 4 of 5 stars

I read this book twice when I was at school, and thought it the best book by H. Rider Haggard that I had read. Reading it again as an adult I could remember little but the horrible end of the eponymous "She", but as I read through it I wondered how it was that I remembered it with such fondness, because there were long passages of religious and quasi-philosophical reflection that must surely have been boring to a child. The actual adventure is mainly in the last 50 pages or so. 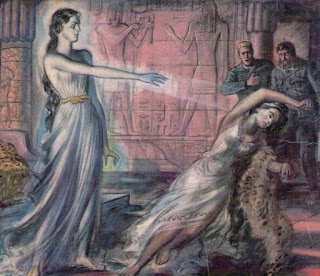 Part of the appeal, for me at least, lies in the setting, the meta-story, as it were, which involves a historical mystery. Horace Holly, a Cambridge don, is asked by a dying friend to be guardian of his young son, Leo Vincey, and is given a box to be opened on Leo's 25th birthday. The box contains the story of Leo's descent from an ancient Egyptian priest, and a love triangle that results in his death at the hands of a mysterious woman living somewhere in central Africa.

As a result Holly and Leo Vincey travel to central Africa in the hope of solving the historical mystery, using clues scrawled on an ancient potsherd in ancient Greek. I suppose that it was enjoying such stories as a child that gave me a taste for history and historical research, so that I still enjoy solving the puzzles one encounters in family history and other historical research, where each mystery solved leads to a fresh mystery that seems to defy solution. And I suppose that is why I still enjoyed this book several decades later.

And such stories of ancient mysteries leading to modern adventures still seem to appeal to later tastes, as the series of Indiana Jones films produced about a century later shows. 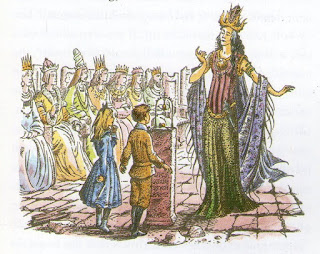 But, as many books do, this one sparked off thoughts that go beyond a mere review. In this case it led me to wonder whether C.S. Lewis had read She, and whether it had given him some inspiration in writing The Magician's Nephew, which is now next on my re-reading list.

The bit about The Magician's Nephew was sparked off by reading this passage, in which She proposes to marry Leo (whom she confuses with his remote ancestor Kallikrates), go with him back to England, and make him king and herself queen:

“But we have a queen already," broke in Leo, hastily. “It is naught, it is naught,” said Ayesha ; "she can be overthrown."

At this we both broke out into an exclamation of dismay, and explained that we should as soon think of overthrowing ourselves.

“But here is a strange thing,” said Ayesha, in astonishment -- "а
queen whom her people love! Surely the world must have changed since I dwelt in Kôr."

Again we explained that it was the character of monarchs that had changed, and that the one under whom we lived was venerated and beloved by all right-thinking people in her vast realms. Also, we told her that real power in our country rested in the hands of the people, and that we were in fact ruled by the votes of the lower and least educated classes of the community.

“Ah,” she said, "a democracy -- then surely there is a tyrant, for I have long since seen that democracies, having no clear will of their own, in the end set up a tyrant, and worship him.

“Well," she answered resignedly, we can at any rate destroy these tyrants, and Kallikrates shall rule the land.”

I instantly informed Ayesha that in England "blasting" was not an amusement that could be indulged in with impunity, and that any such attempt would meet with the consideration of the law and probably end upon a scaffold.

"The law," she laughed with scorn -- "the law! Canst thou not understand, O Holly, that I am above the law, and so shall Kallikrates be also ? All human law will be to us as the north wind to a mountain. Does the wind bend the mountain, or the mountain the wind ?

This appears very similar to the attitude of Jadis, the former Queen of the dead world Charn, when she comes to England, and later to Narnia.

And I suppose I was inspired by reading books like this as a child to incorporate the trope of ancient mysteries inspiring or contributing to modern adventures into my own story The Year of the Dragon, where I used the legend of Lobengula's treasure in a similar way. 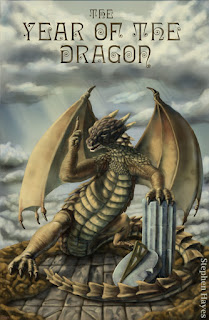 In this case, the real life event was a story found in the archives about John Jacobs. In 1908 Jacobs persuaded Susman, a Jewish trader at Lialui, and later of Livingstone, Northern Rhodesia, to search for Lobengula's treasure in Portuguese territory. Susman said after travelling for 3 months, Jacobs became more and more hazy about their goal. Eventually Susman flogged Jacobs, and was fined in court. Jacobs was deported from Northern Rhodesia in 1909. Then Jacobs persuaded Samuel Brander (the founder of the Ethiopian Catholic Church in Zion) to go on a similar treasure hunt, and they travelled there in 1917, but left without finding any treasure. On the way back Jacobs was arrested in Southern Rhodesia and charged under the immigration laws This story is found in a Memorandum from the Secretary for Native Affairs in Livingstone, dated 5 Aug 1917, in the Tshwane Archives Depot at NTS 1420 5/214.

And it was just such stories that authors like Rider Haggard used as triggers for adventure. John Jacobs was doubtless a con man, but the fantasies of con men can lead to interesting adventure stories.

I remember the book of Musrum in Windhoek.

Ah, yes. And there was a sequel, called Wintersol.